What's happening on DeKalb and Cascade?

The City of Atlanta has two main transportation funding initiatives: the Renew Atlanta bond approved by voters in 2015 and the transportation sales tax (TSPLOST) voted in during 2016. By 2019, the City announced it had less money and higher project costs than anticipated. As a result, the original project lists would have to be reprioritized. Public participation in this process resulted in a clear mandate for the City to focus on building “complete street” projects; however, not all of those projects made the final list.

As a result, we focused our 2019-2020 street campaigns on two complete street projects with strong community support that were not fully funded: Cascade Avenue in SW Atlanta and DeKalb Avenue in the southeast. We worked with community members in neighborhoods along both corridors to organize street actions and engage residents and businesses to advocate for safety improvements through the resurfacing projects that were funded for each.

As a result, we were able to get some of the changes we wanted. Read more for the current status of the projects and what your support and advocacy have helped accomplish so far! We'll also share what we're working on next when it comes to street campaigns and our goal of holding the City accountable to build the projects in its plans. 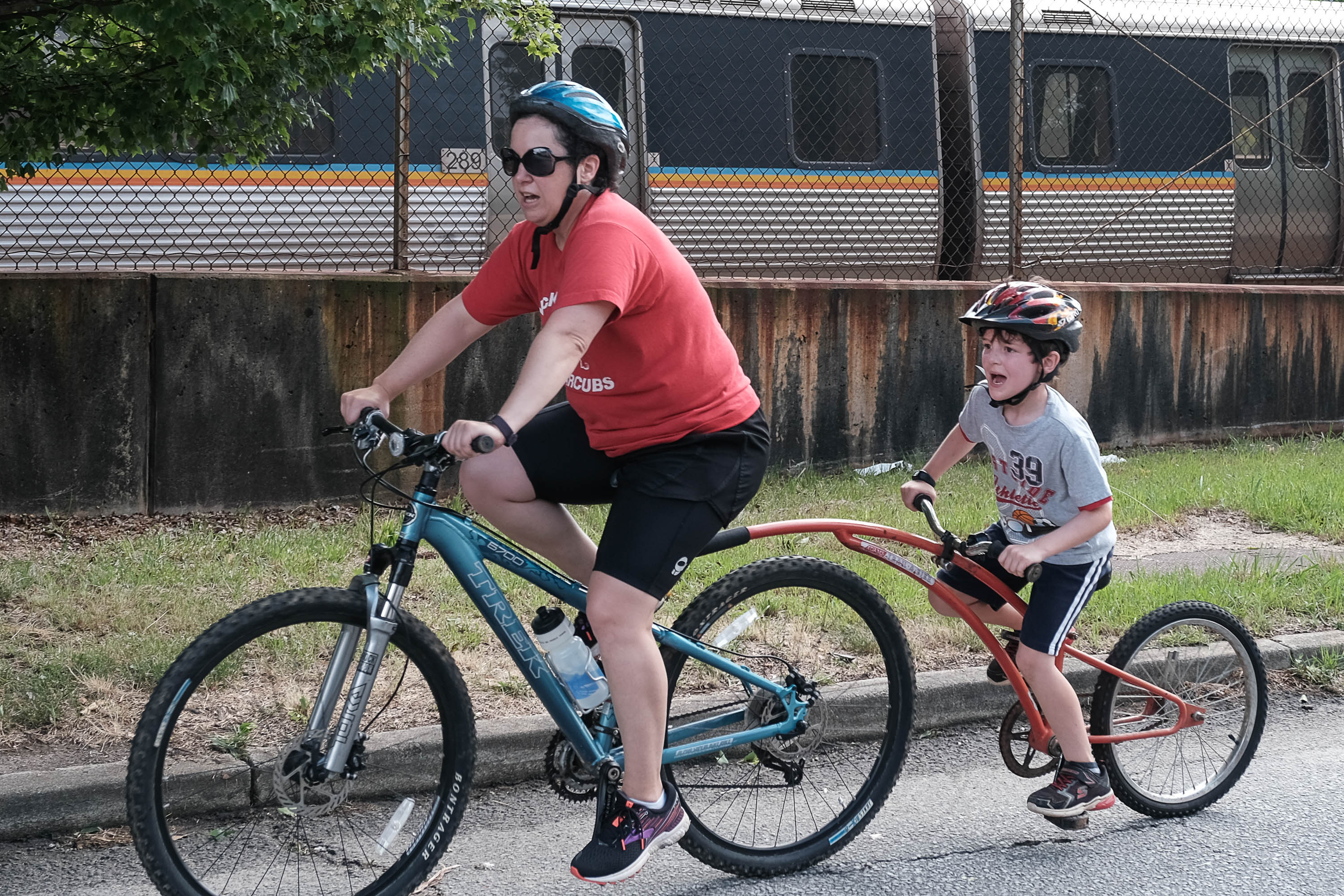 Status: Secured a short segment of the protected bike lane and conversion of the reversible lane to a center turn lane. As of November 2020, construction on the resurfacing project with these elements was scheduled to start in January 2021. Visit the Renew Atlanta / TSPLOST webpage for additional information.

Spurred by long-standing community interest, we’ve advocated for a safer DeKalb Avenue since launching a petition to fix the pothole-riddled street in 2013, when hundreds experienced its bumps and jolts during Georgia Rides to the Capitol. Its relatively flat topography and the many neighborhoods and transit stations it connects made it a natural choice for our Connecting the City initiative.

In 2015, we seized the chance to get DeKalb Ave onto the Renew Atlanta project list. Over the years, we held an infrastructure tour and walks to keep the project front and center. In 2018, we worked with Kronberg Wall to illustrate our vision for a protected, tree-lined space for people on foot, bike, wheelchair, scooter, and stroller on DeKalb Ave, in tandem with removing the treacherous reversible lane and resurfacing the street. That same year, we opened the street for 74,000 people to bike, walk, or wheel down DeKalb Ave through Atlanta Streets Alive.

Yet in 2019, after three years of public meetings, funding for the Complete Street on DeKalb Avenue was cut, leaving only resurfacing and replacing the reversible lane with a center turn lane and design for a future Complete Street in the budget. The effort did not stop - because the resurfacing project still had funding, we pivoted to seeking as many safety elements as possible through that project. 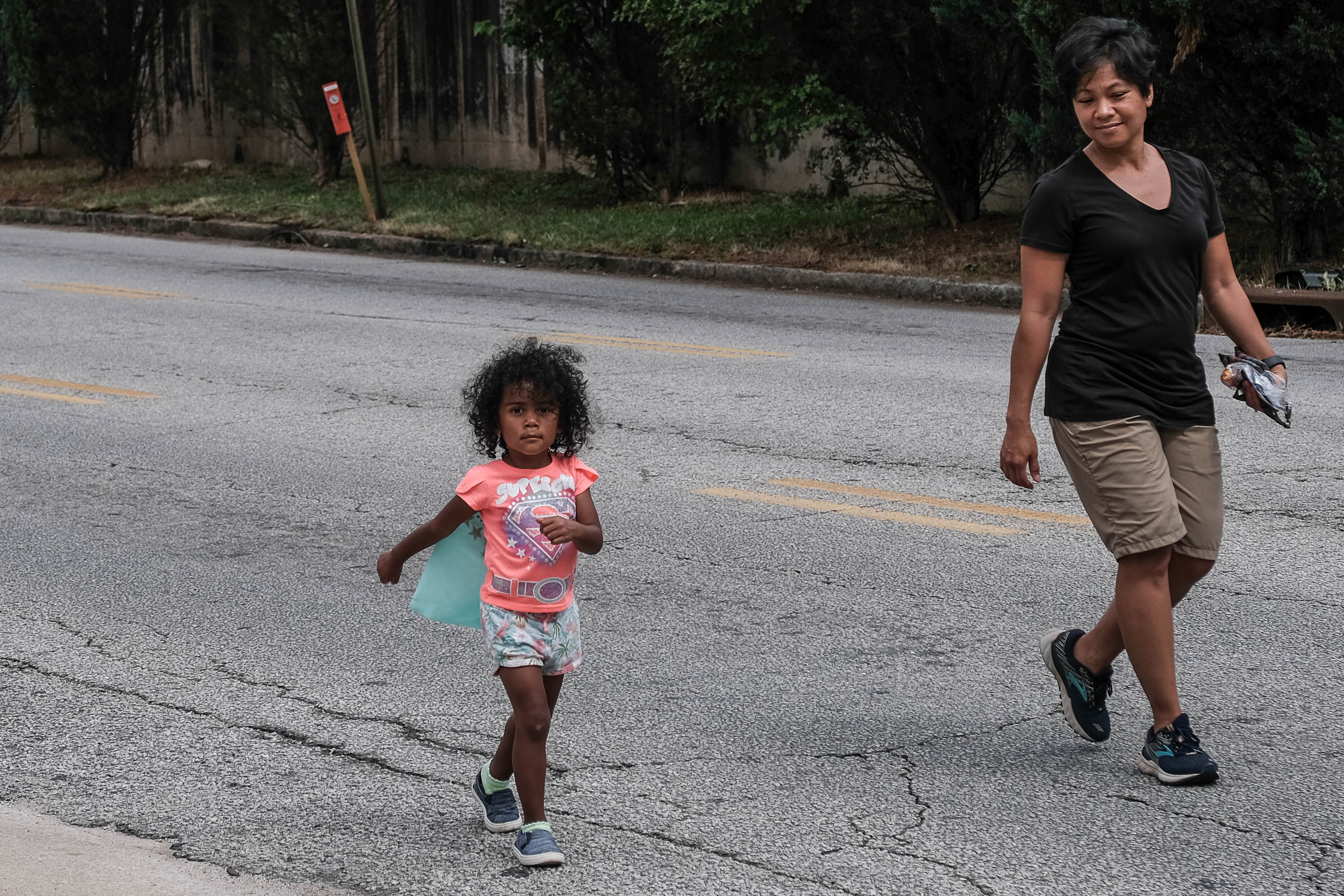 We can report that some--but not all--of our original goals for the street will be accomplished through the repaving project.

Specifically, we called for the City to:

1. Fix the Moreland intersection (letter to the City outlining all our proposed changes).

🎉This design was updated to place the cycletrack adjacent to the curb.

2. Create a safe first- and last-mile connection to transit and the neighborhoods south of DeKalb Ave

😞 Despite strong support from neighborhoods to the south and our advocacy efforts, the cycletrack was NOT extended to connect to the MARTA station.

🎉However, it was extended to provide the option to connect via a parallel street (Iverson). We will continue to push for the intersection of Whitefoord / Oakdale at DeKalb Ave to be expanded to allow room for both the cycletrack and the left turn bays.

3. Extend the proposed LIT lane at the Arizona intersection by one block to reach Clifton

🎉The bike/scoot/LIT lane was extended to connect Arizona to Clifton.

🎉We also asked for the three-lane configuration to be continued to the City limits rather than ending at Rockyford as originally planned, and we're told that change has been made to the plans. 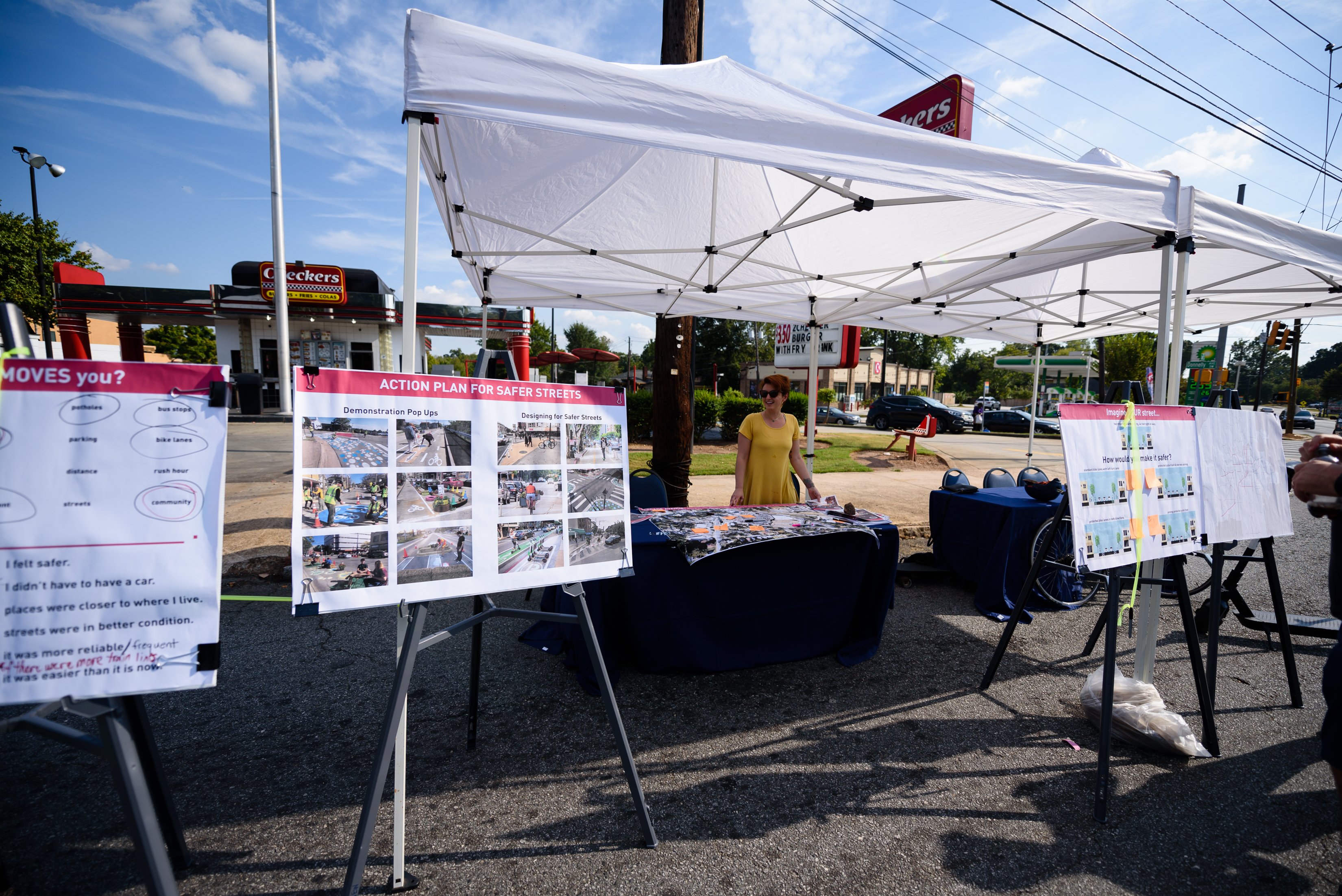 Status: Secured some safety improvements for Cascade Ave including a LIT lane and safety elements.

As of November 2020, construction was scheduled to start in December 2020. Visit the Renew Atlanta / TSPLOST webpage for additional information.

Cascade Road, Cascade Avenue, and Ralph David Abernathy Boulevard are three sections of one critical corridor that serves dozens of Southwest Atlanta neighborhoods. Two of the three sections, Cascade Road and Ralph David Abernathy Boulevard, are part of the High-Injury Network and ranked among the most dangerous roads in the city of Atlanta. The third section -- connecting these two High Injury streets -- is Cascade Avenue.

On January 19, 2019, David Gordon, a 52-year-old beloved longtime resident of Cascade Ave, was struck and killed by a driver while crossing Cascade Ave. He was in a crosswalk. The collision happened less than a quarter-mile mile from where the street name changes to Ralph David Abernathy Boulevard. A complete street project was proposed in 2016 to address the hazardous conditions on Cascade Avenue, where David lost his life, but the construction funding was cut due to budget shortfalls.

We have advocated for a safer Cascade Road/Avenue since learning of its prominent place on Atlanta’s High Injury Network. In 2019, following a community engagement process to select the route, we held Atlanta Streets Alive - Southwest on Cascade Avenue and Ralph David Abernathy to highlight the need and demand for safety improvements. During the open street, with support from AARP Georgia, we partnered with Pillyr to create a popup walk/bike space that narrowed the wide lane near a bus stop to show how simple changes could dramatically improve safety and accessibility for people outside of cars.

“I have 651 reasons to support a safer Cascade Rd. and they are sitting in their classrooms @APSTAGAcademy” - Wykeisha Howe [Community advocate, TAG mom, PTA officer District 10, Atlanta Bike Champion]

So many community advocates took action by attending public meetings, getting their elected officials on board, scheduling meetings with the City’s new Department of Transportation, elevating the issue in interviews and a video, organizing a very effective public action, and more. 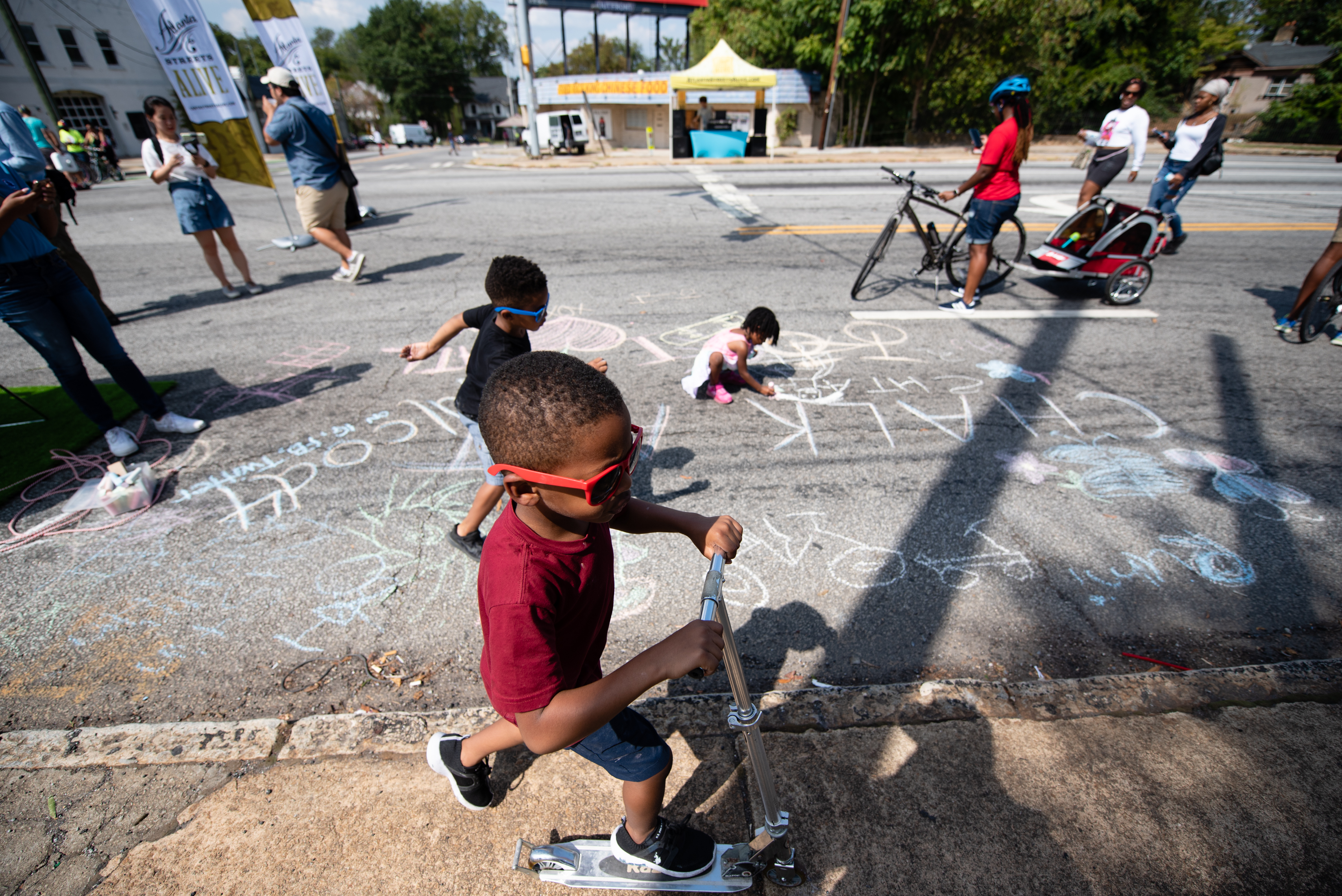 That same year, thanks to the persistent work of community leaders, local advocates, and Atlanta City Councilmember Marci Collier Overstreet, Cascade Road in District 11 received funding to become a Complete Street. A section of Ralph David Abernathy Boulevard in Westview was funded as well and completed in 2018.

🎉Following a community-led #RespectCascade action to highlight the urgent need for safety improvements on Cascade Avenue, the City of Atlanta revised the Cascade Complete Street project to include some safety improvements that could be added during the street resurfacing. Elements include bus stop enhancements, bicycle lanes, and pedestrian safety improvements. The City also improved the signal timing to make it safer for kids to cross the street on their way to school. 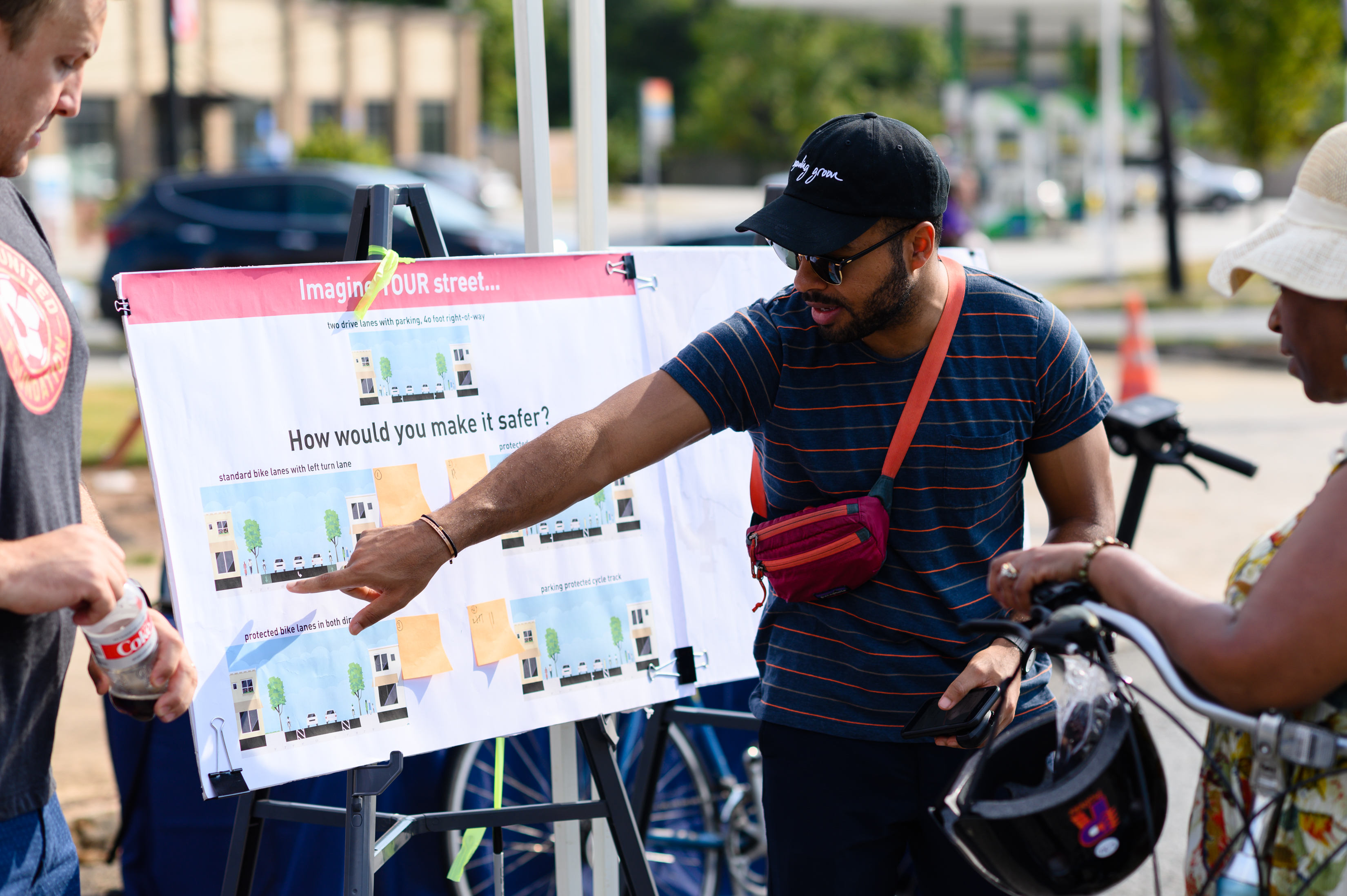 One of the strategies outlined in our 2020+ strategic plan is to hold the City accountable to build projects it has planned. As the 2019 rebaselining of Renew/TSPLOST illustrates, community support is an element of every successful transportation project.

One tool we are developing right now is an interactive online tool to share information about infrastructure projects and advocacy efforts while also providing a way for people to report issues and make suggestions. This tool will provide a resource to find the status of projects in existing City plans, along with project history and any opportunities to take action.

As we look ahead to the new year, we are developing more campaigns to make streets safer for people to walk, ride, and roll. With the addition of Street Committees on two of our most dangerous streets - Hollowell and Moreland - we’ll continue to look to the community members who are advocating for their priorities on these important corridors. So stay tuned for our 2021 street campaigns, brought to us by advocates like you!