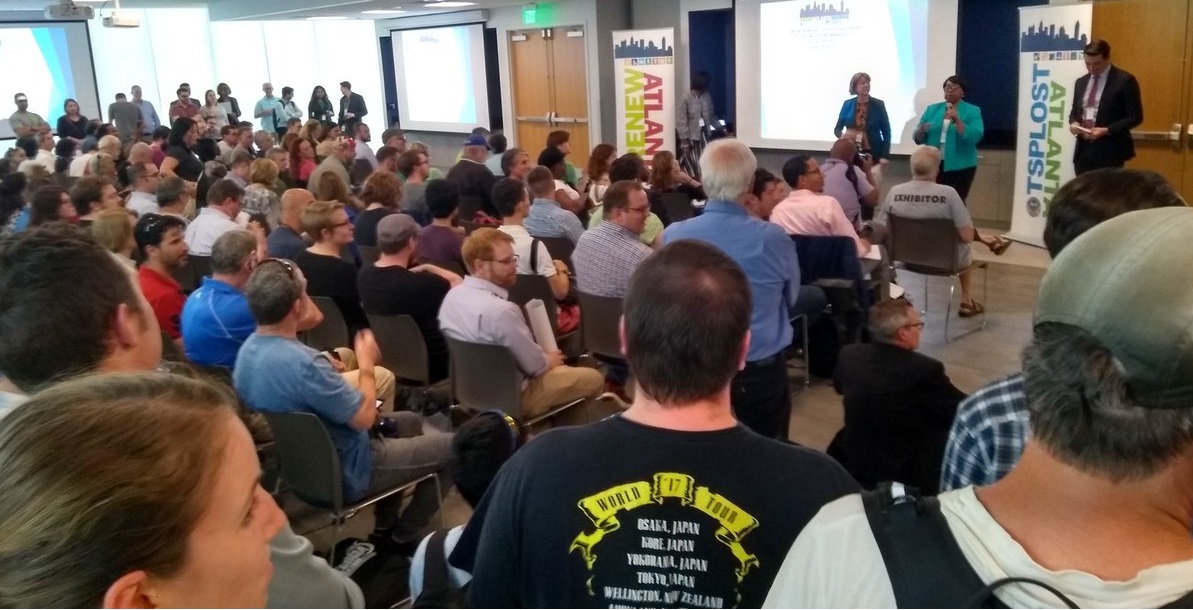 Three years after voters overwhelmingly approved the Renew Atlanta bond, in March 2015, just one out of the fifteen Complete Street projects has been completed and only two projects have progressed beyond a quarter of a percent complete.

Now, we're seeing one project after another get kicked down the road to 2020, according to the Renew Atlanta Complete Street Project pages. Construction on phase 1 of DeKalb Avenue was scheduled to start this year but now it won't start until 2020; Cascade Road was also going to start this year but now it's been delayed until 2020. The same goes for Howell Mill Road.

After the most recent open house for Monroe Drive/Boulevard Complete Street, which failed to include a road diet north of 10th Street, it's become clear that the city needs to commit to these Complete Street projects.

At the time the bond was passed, Mayor Kasim Reed praised its passage, saying it would add 30 miles of bike lanes to the city’s bikeway network. (Not all of those bike lanes were expected to come from Complete Streets projects - some would be installed through repaving projects on streets that happened to be bike routes in the City’s council-approved bike network.)

ABC had been a vocal advocate when the bond was first introduced, pushing for 15% to be allocated to bikeways and Complete Streets (we got 13% and took the win). 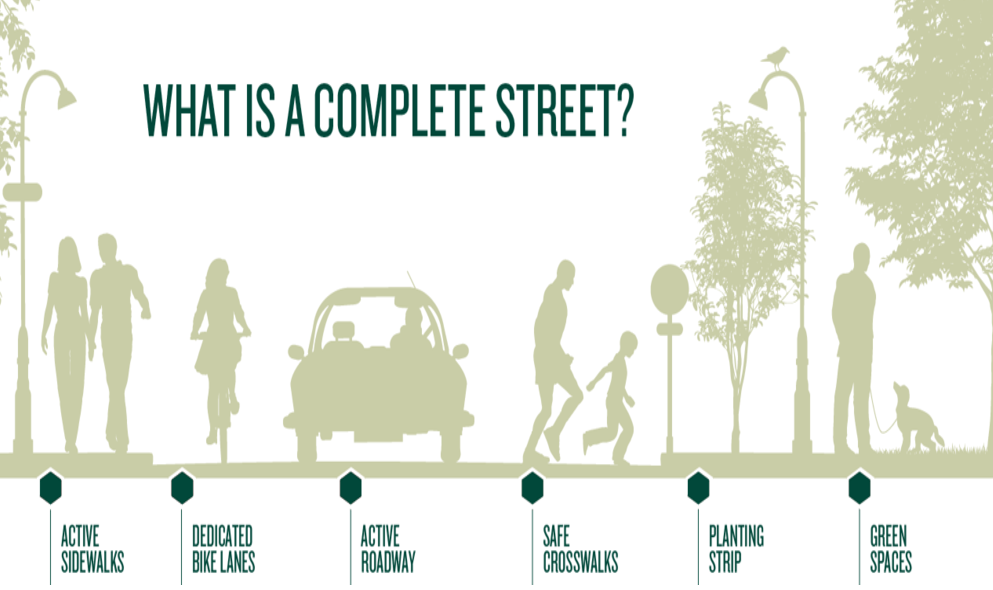 “Complete Streets are streets for everyone. They are designed and operated to enable safe access for all users, including pedestrians, bicyclists, motorists and transit riders of all ages and abilities. Complete Streets make it easy to cross the street, walk to shops, and bicycle to work.” (Accessed via RenewAtlantaBond.com on July 16, 2018)

Lynhurst Drive is the only Complete Street project listed as 100% complete. Lynhurst got a street repaving, wider sidewalks and curbs, pedestrian lighting, 23 upgraded ADA ramps, for a total cost $of 6.3M.

This project failed to make space for people who bike.  “Safe access for all users, including pedestrians, bicyclists” is a hallmark feature of Complete Streets. We were told there was not enough space for bike facilities. Whatever the reason, the result is that this project - the only Complete Street project shown as complete three years into the bond program - does not meet the Renew Bond team’s own definition of a Complete Street.

Renew Atlanta disclosed during a quarterly report to the City Council Transportation Committee that the lack of public input and engagement on the Lynhurst Drive Complete Street project contributed to its quick turnaround. A stunning admission considering residents on this street are now complaining about the placement and intensity of the street lights installed along the road.

Further conversations with city officials close to these projects revealed that, in addition to Lynhurst, the Complete Street projects for Forsyth Street, Joseph E. Boone Boulevard, Joseph E. Lowery Boulevard, and Monroe Drive/Boulevard will not be getting bike facilities. Perhaps even more alarming, city officials have indicated that they are mulling the feasibility of dedicated bike facilities on other Complete Street projects that were originally slated for safer bike access.

Over the past three years, we have asked repeatedly when the other Complete Streets projects would get off the ground - or at least out of concept phase. Our concern was that the funding would run out before the city gets around to these complex and important projects. After the latest quarterly report to the Transportation Committee, on July 11, it appears that the bond was underfunded to begin with, as the projects were not scoped in detail before the bond passed. The Renew Atlanta team says other funding sources through the Georgia Department of Transportation or the federal government will help make up the gaps.

Some projects have been delayed by controversy, such as Monroe Drive, where residents, commuters, and neighborhoods have taken opposing sides. Safety advocates including ABC have pointed to the fatal crash that took the life of a Grady High School student as an indication that, differences in public opinion aside, planners for high-crash corridors like Monroe should prioritize safety over speed.

Some residents fear converting 4 lanes to 2 plus a center turn lane would push traffic to residential streets, making them less safe. (The Virginia-Highland Civic Association pointed out that 3 lanes are often more efficient and predictable than 4 when one of the lanes is a center turn lane.)

In 2017, an election year, the city commissioned a traffic study to assess the impact of building Complete Streets, such as Monroe Drive, on adjacent neighborhood streets. The traffic study indicates that Complete Streets on DeKalb and Monroe Drive will yield marginal increases in "cut through" traffic while having substantial reduction in the percentage of crashes. Renew Atlanta, for instance, reports that a road diet on Monroe Drive north of 10th Street would reduce crashes by 29% while increasing traffic on some side streets by 5-6%.

Even Complete Streets projects with clear support like Howell Mill Road and DeKalb Avenue, where 100% of neighborhoods to the south of the corridor, Inman Park, Candler Park, and the Old Fourth Ward Business Association, have written letters of support for a Complete Streets approach, are facing incomprehensible delays.

There are a few bright spots. The western phase of the Cascade Road Complete Streets project has actually been enhanced, due to community calls for it to include a multi-use trail to connect the Cascade Springs Nature Preserve. A trail segment was added through the East Paces Ferry Road, and other projects would add bike facilities that are important connectors.

It’s time for the City of Atlanta to commit to Complete Streets and start building these projects.

Our streets are public spaces - they belong to all of us. If speeding cars operating without regard for the safety of others prevent people from exercising their right to transportation options like walking, biking, and getting to MARTA, street designs need to be updated to be truly accessible to all users.

All of this points to a lack of coordinated vision when it comes to transportation network planning and implementation. We have multiple city agencies working on transportation improvements, many of them on equal footing in the city structure, which leads to confusion over leadership and whose vision is being built.

Not only has the Atlanta Bicycle Coalition brought technical advice and broadcast support for these projects through the Infrastructure Stakeholder Committee and our own advocacy efforts, but we have also worked with Office of Mobility Planning in 2016 and 2017 to organize trainings with leading technical experts on bikeway design and Complete Streets to assist the Renew Atlanta team. The lack of urgency leads us to believe that Renew Atlanta’s reliance on contractors, many of whom are specialist in suburban arterials, need more supervision and guidance.

More importantly, we need cohesive leadership with vision, one based on the reality of our city’s growth and the fact that doing nothing on streets like DeKalb, Howell Mill, and Monroe won’t mean leaving well enough alone - it will mean stagnation. As our Planning Commissioner says clearly and often, as the population increases, if we all keep driving alone, we’ll be more and more entrenched in traffic.

Complete Streets are not glorified resurfacing projects - they create real transportation options and they are one of the few ways the city can put biking, walking, and riding transit on the equal footing with driving.