Last fall, we alerted you to an alarming rise in pedestrian fatalities. Although we had only partial data at the time, it appeared even more people were losing their lives in needless and preventable ways on streets in Atlanta and across the state.

Now we have more information, and it’s worse than it seemed. 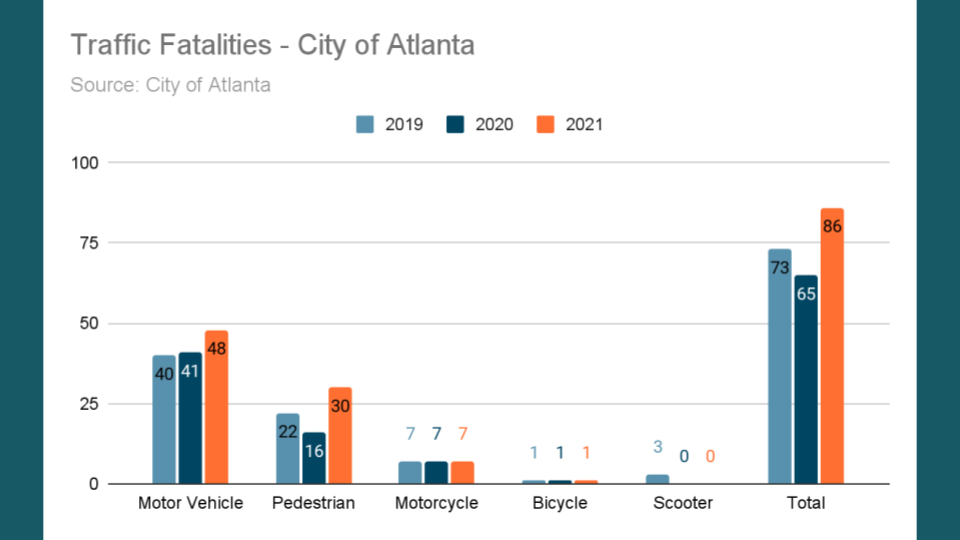 These statistics represent individual human lives as well as our collective circles of family and community — we all lose when people lose their lives on our roads.

On Friday, January 28, 2022, U.S. Department of Transportation Secretary Pete Buttigieg addressed the nationwide trend and efforts to reverse it, announcing a National Roadway Safety Strategy aimed at eliminating traffic deaths, along with rules to make agencies accountable for achieving this goal, often referred to as Vision Zero.

The strategy is based on the “Safe System Approach” that focuses on “safer people, safer roads, safer vehicles, safer speeds, and post-crash care.”

Streetsblog called this a “paradigm shift for which sustainable transportation advocates have fought for decades.”

However, Streetsblog adds “Traffic violence has been so broadly normalized and deliberately invisibilized for so long that a recent poll showed that nearly 75 percent of Americans didn’t even know that 2021 is expected to be the most deadly year on US roadways in 15 years, once federal counts are finalized in the coming months.”

Please help us sound the alarm by sharing this news along with some steps we can all take to make streets measurably safer with your friends, family, and communities.

While the news is a welcome shift in national policy, it will only be as effective as the agencies responsible for implementing it.

The guidelines also have some big omissions. Missing are any regulation of the increasing size of SUV front ends playing a role in crashes being increasingly fatal, the “dangers that traffic enforcement itself can pose to road users, particularly to road users of color who are disproportionately the victims of police brutality and murder,” or any commitment to ensuring all transportation spending makes streets safer.

We will continue to advocate that the City of Atlanta adopt a Vision Zero plan that prioritizes racial equity and engineering solutions over armed enforcement.

Read more about the changes: