Atlanta Department of Transportation prevents speeding, including street racing, through street improvements, traffic calming projects that support community use of streets, and expanding the types of streets that qualify for traffic calming and tactical urbanism.

Atlanta City Council and Georgia General Assembly remove laws that allow for over-policing of walking, biking, and riding transit, including crossing a street outside of a crosswalk — in many places, the nearest crosswalk is over a half-mile away.

City and state prohibit racial profiling in all traffic stops.

Atlanta City Council expands the default speed limit of 25 mph to cover 90% of City of Atlanta streets and works with the Georgia Department of Transportation to lower speed limits on state routes. Atlanta Department of Transportation works with communities most affected by traffic violence and most burdened by fees to develop a speed camera program instead of armed police enforcement. 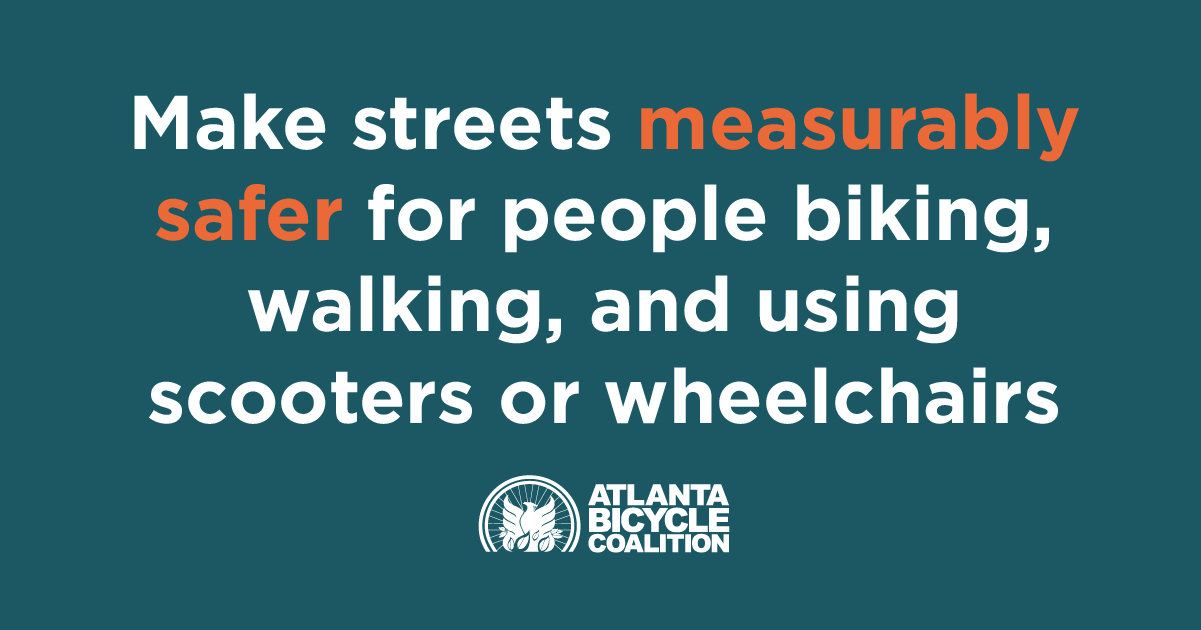 Nationally, the number of people killed while walking in the U.S. increased 54% between 2009 and 2018. This followed a three-decade drop in pedestrian fatalities. Fatalities increased fastest among Black men and people over 60. In the city of Atlanta, fewer people died on our roadways in 2020 than the year before, yet the loss of even one person in traffic is unacceptable when we could have prevented it. Too many of our streets are not safe in any mode of travel, but especially not for people walking, biking, running, waiting for the bus, or using wheelchairs, scooters, or strollers.

What’s more, the most dangerous roads — Atlanta’s “High-Injury Network” — are concentrated on the south and west sides of the city, in neighborhoods where most residents are Black and where incomes are below the city’s median income due to systemic racism. Unsafe streets in systematically marginalized communities also lead to more interactions with the police. We need leaders who understand the need for an equitable approach to safety. Equity is a just outcome that allows everyone to thrive and share in a prosperous, inclusive society. Equity puts into practice, through policies and allocation of resources, principles that intentionally dismantle generational power structures and other disparities that continue privilege.

Regardless of where you live or who you are, it’s time for the era when a simple trip to the store could turn deadly to come to an end. We have to make a decision: prioritize safety or accept the status quo?

In 2020, the City of Atlanta committed to Vision Zero — a safe systems approach that strives to eliminate traffic fatalities and serious injuries. Achieving that level of safety in our streets will require the City to fund and build streets safe for people to bike and walk, to install curb ramps so people using wheelchairs can get to sidewalks, and to deliver transit service that doesn’t punish riders with long wait times and bus stops without shelters or benches.

When combined with infrastructure projects that prioritize safety for people using all modes of transportation, the policy recommendations can create an Atlanta where no one dies in traffic, people can use streets without fear of biased enforcement, and vehicles travel at safe, predictable speeds throughout the city.

JOIN THE MOVEMENT: Creating a More Equitable City Through Mobility