We've been saying it for years, dating back to our 2014 petition calling for then-Mayor Kasim Reed to "Fix DeKalb Ave": DeKalb Avenue is fast, dangerous, and out of control.

Leading up to the 2015 referendum on the Renew Atlanta Infrastructure Bond, we successfully pushed the City to put DeKalb Ave on the Complete Streets project list. Serving on the Stakeholder Committee, we advocated for the Complete Streets projects on the list to come first, because we were concerned money would run out before the City got around to building them. That's exactly what happened, and the new administration had to reprioritize the remaining projects.

We all know what happened next.

Despite 3 years of public meetings showing strong public approval, letters of support from every neighborhood association adjacent to DeKalb Ave, with the exception of Lake Claire, and numerous commitments from Renew Atlanta's first head, funding for the Complete Street on DeKalb Avenue was cut. What made it onto the new list March 15, 2019, was money to 1) resurface the street (this would replace the reversible lane with a center turn lane) and 2) design a Complete Street (assuming this would tee up future funds to actually build it from an undetermined source...).

But the fight isn't over yet.

We are calling on the City to install bike / LIT lanes (LIT stands for light individual transportation, and includes bikes & scooters) when they repave the street. This will do several things: give more of a buffer between cars and people walking, reduce speeds, and give biking a physical footprint on this important corridor as we continue to advocate for our vision below.

Read more to find out how we are working to make DeKalb a safe and complete street for all and learn how you can help!

In 2018, to keep the pressure on for DeKalb, the Atlanta Bicycle Coalition held Atlanta Streets Alive on DeKalb. 74,000 people showed up in support.

During the reprioritization of Renew Atlanta/TSPLOST monies, we worked with our close partner Kronberg Wall to propose a lower-cost solution to Complete DeKalb Ave to the City.

Following the March 2019 vote, the Atlanta Bicycle Coalition organized "Walk the Walk on DeKalb Ave," a demonstration demanding change for a better future on DeKalb Ave. We got some good media coverage.

Along with community members and neighborhoods along DeKalb, we continue to work for a DeKalb that serves more than high-speed traffic speeding through our communities. Commuters who want a DeKalb that is safe for all modes have organized themselves to hold safe commuting rides and keep the pressure on to Complete DeKalb Ave. A resident of the street wrote an op-ed and is hosting a fundraiser for our work Sunday, June 9th at 7 pm.

Any project on this key, flat corridor must make the road safer -- for everyone.

Stop by one of our tents Sunday, June 9th, during Atlanta Streets Alive: Cross-City and to take a pic and share your support on social media. We'll have tents in front of the Inman Park MARTA station & in Five Points Downtown with DeKalb posters showing project info and social media handles of the right decision-makers to tag! 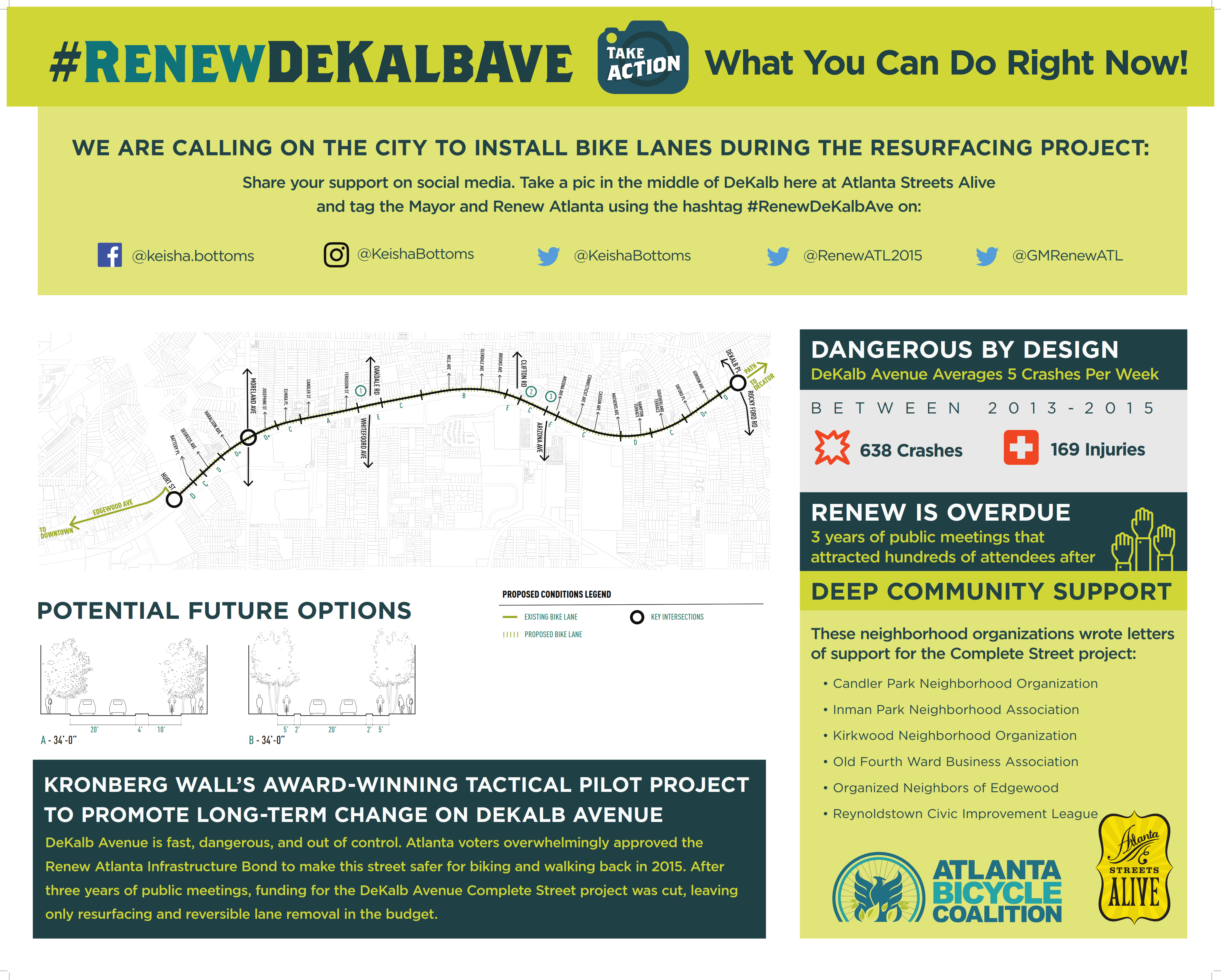