Downtown Atlanta's Good, Not So Good, and Potentially Great Changes 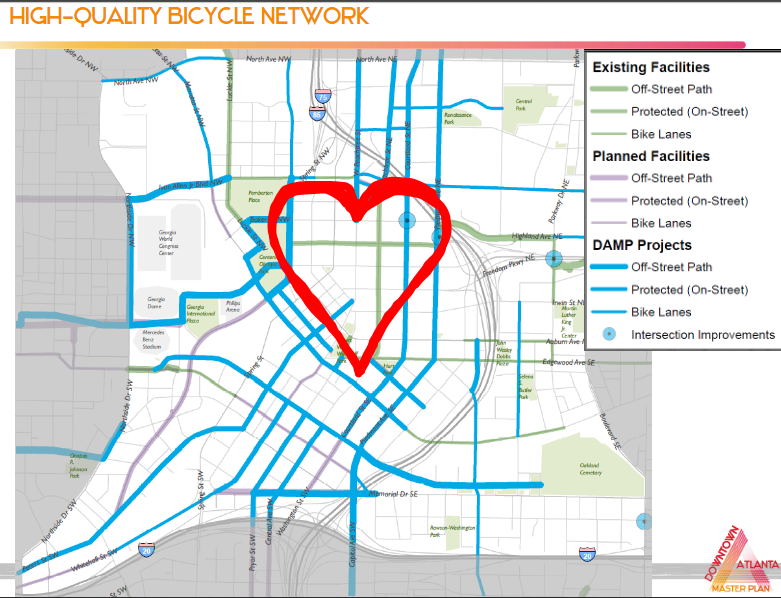 The Downtown Atlanta Master Plan is hosting their final public meeting today and you'll want to see what they have in store for Downtown's Bicycle Network.

First the not-so-good. They are proposing removing the Peachtree Center Avenue protected two-way bike lane. They want to replace it with dedicated lanes for buses! Our jaws dropped when we saw this slide.

But we need you to attend the Downtown Atlanta Master Plan public meeting (also on Facebook here) and show your support for safe space for biking on Peachtree Street.

Here are the major proposed connections to build out the Downtown Bicycle Network.

The biggest impact will be removing the Peachtree Center Avenue Cycletrack. This would leave a big hole in the heart of the Downtown Bike Network.

We were initially alarmed by the removal of this bicycle facility, but are willing to consider it - if the lanes are replaced with safe bikeways on Peachtree Street. (We also like the idea of dedicated lanes to give buses priority.)

The two-way protected bike lane on Peachtree Center Avenue is plagued with delivery vehicles parked in it, way too many driveways crossing it, and turning cars, taxis, and trucks not looking for people biking from the opposing direction. This one-way street functions like an alleyway for Peachtree, our main street. The land use on Peachtree Center - parking lots and garages, back entrances, and only a few hotels and restaurants, is motor vehicle-oriented and doesn't fully support biking.

Peachtree Street, on the other hand, is people-centered with walkable destinations, transit station access, and parks/parklets, not to mention bike share.

Downtown's proposal calls for a "shared street" on Peachtree near the Five Points MARTA station. Add dedicated space for bikes, and extend it to connect with existing bike lanes on Peachtree and bam! You've connected the heart of the city.

The Streetcar track crossings at Auburn and Baker make this a design challenge, but we know there is a constant demand for access to this direct and flat corridor in the center of Downtown.

For those traveling further north in Midtown, there will also be a very good connection via the Juniper/Courtland and Piedmont protected bike lanes. 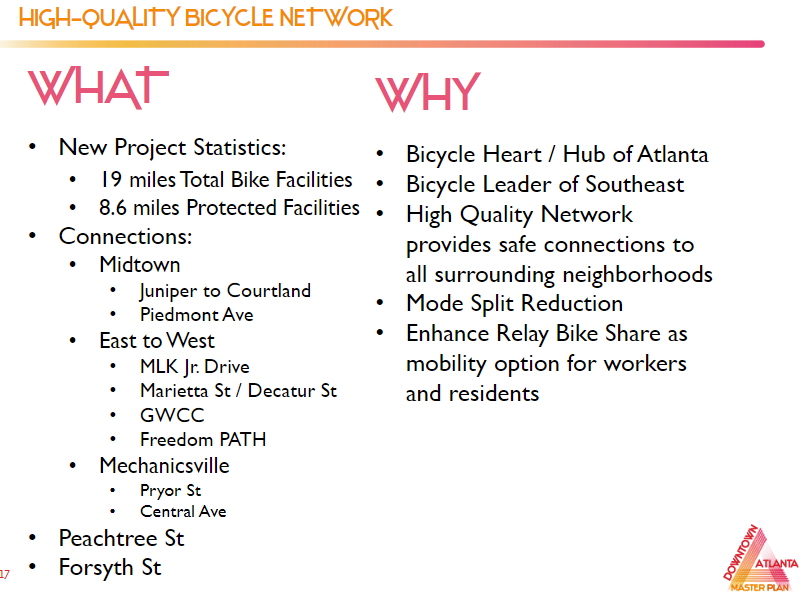 As you can see, the Juniper/Courtland and Piedmont north-south connection to Midtown are greatly enhanced by protected, one-way bike lanes. We are pleased to see that the Downtown Plans overlap with Midtown to create a cohesive network. 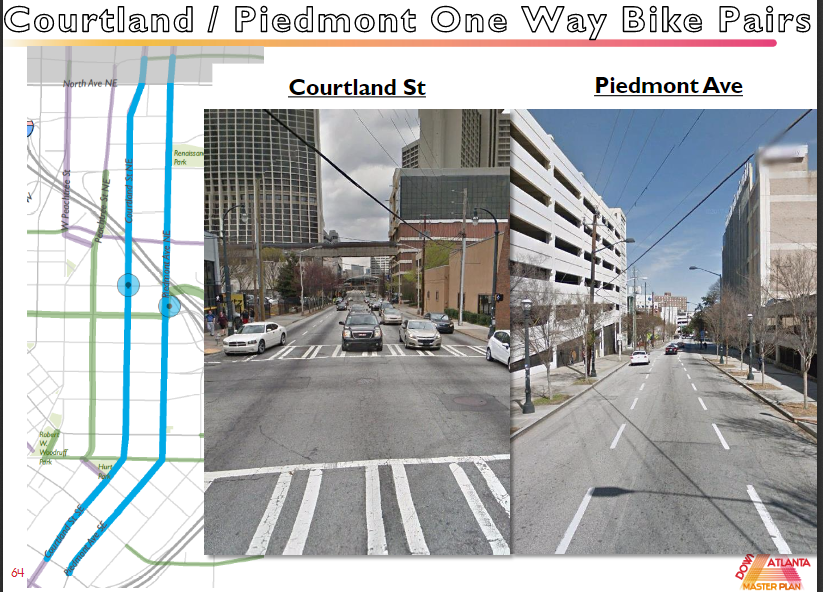 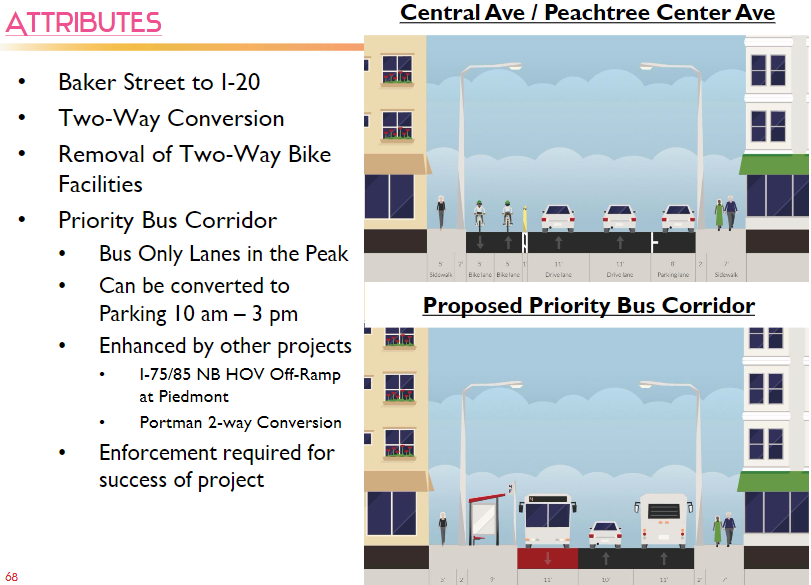 We know it is possible to redesign Peachtree Street for all modes. Look no further than a signature Downtown Atlanta Master Plan project that would transform Peachtree Street near Five Points Station, from Marietta Street to Martin Luther King, Jr. Dr., into a Shared Street for all modes. This segment will prioritize pedestrians and people who bike. 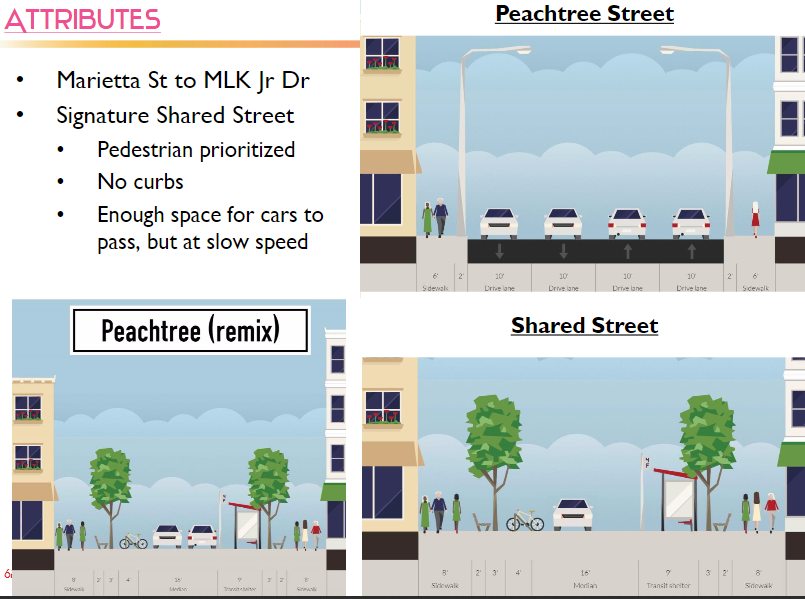 Don't let the Downtown Atlanta Master Plan stop here. Let's prioritize biking and walking all the way up Peachtree Street and fill the hole in the heart of Downtown Atlanta's Bicycle Network.

We will send out any actions you can take after the meeting in our next Advocacy Update on Friday, September 15th. Stay tuned!