Build the best, prepare for the worst 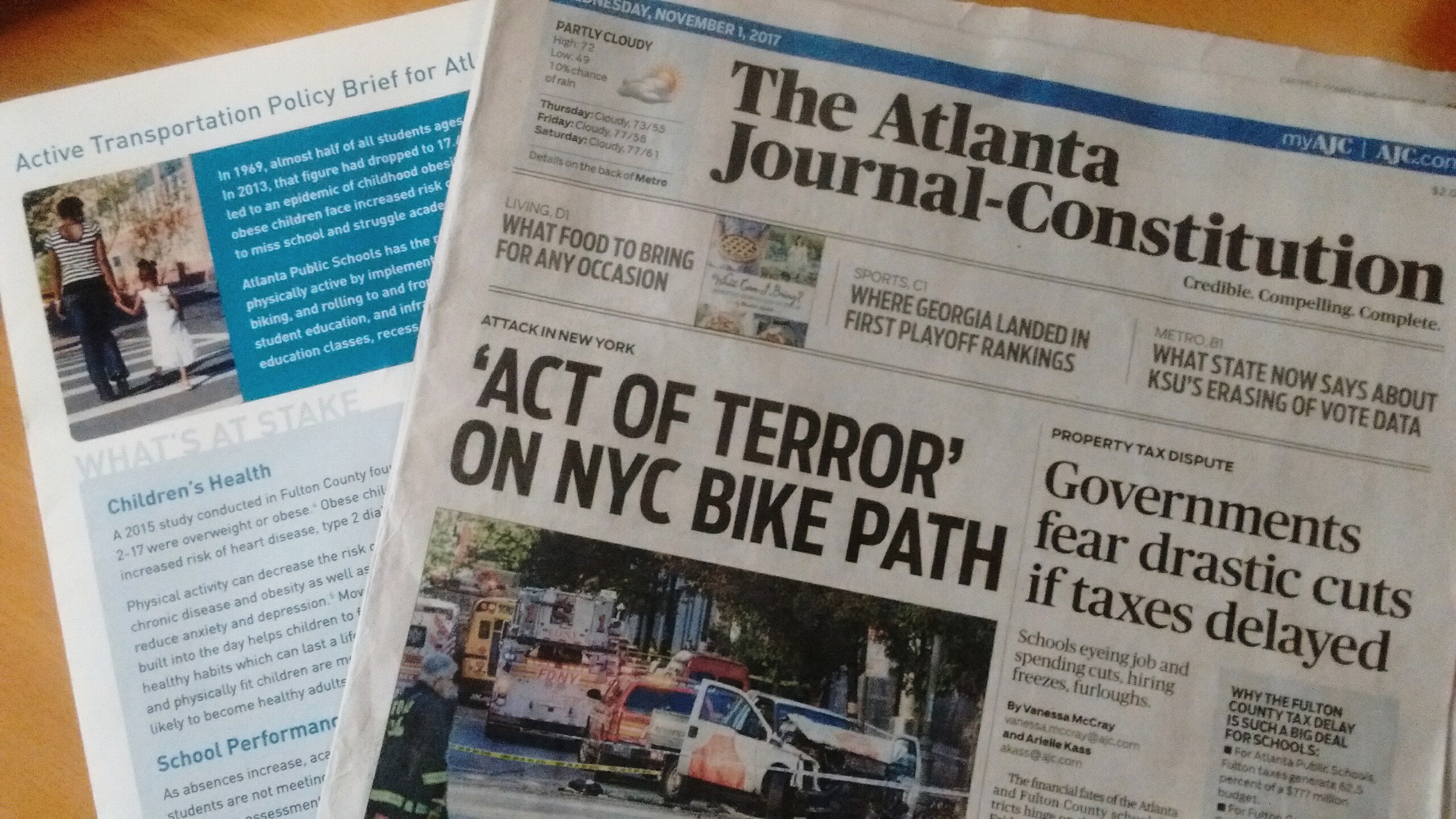 In the wake of the the horrible terrorist attack that claimed the lives of eight bicyclists riding on the Hudson River Greenway, the busiest bicycle path in the country, we urge our elected officials and city leaders to renew their focus on protecting our most vulnerable road users from senseless crashes that could be prevented while, at the same time, building infrastructure to combat our worst-case scenarios.

We are paying close attention to what measures can be taken to prevent attacks like this in Atlanta. One thing's for certain: Plastic pylons are no match for steel and concrete bollards.

Earlier this year, three-foot-tall steel bollards stopped a car in New York's Times Square from "plowing into dozens more pedestrians after a man, high on PCP, drove unimpeded through three blocks of city sidewalk, killing an 18-year-old woman and injuring 20 other people, the police said."

New York City is considering adding more steel bollards on sidewalks and pedestrian plazas. Perhaps more importantly, their city leaders and planners are asking, "Why are cars still allowed to drive through the city’s most clogged tourist attractions in the first place?"

In looking for solutions, elected officials and city leaders should not stop at securing our bike lanes and popular trails like the BeltLine against attacks like the ones in New York and Charlottesville. (The BeltLine and PATH have steel and concrete bollards on some segments to prevent vehicles from entering - but not all.)

Elected officials and city leaders must also resolve to protect cyclists and pedestrians on a daily basis from everyday crashes caused by speeding, negligence, and distracted driving.

At a recent Renew Atlanta meeting for Marietta Street, we were stunned to hear that the planned bike lanes south of Ivan Allen Jr. Boulevard, in the heart of a major tourist destination that includes the College Football Hall of Fame and Centennial Olympic Park, faced heavy resistance from local leaders and would not be included in the designs.

We noted that bike lanes make streets safer for those who are walking and driving. By reducing speeds and crashes, buffering the sidewalk, and better organizing modes, bike lanes enhance the experience of driving.

We explained that with the tragic increase in the use of motor vehicles as weapons, preventing the opportunity to build up speed could even make this incredibly popular destination safer in ways we can't predict.

The Renew Atlanta Complete Street project on Monroe Drive that threads through Piedmont Park, the BeltLine, and Grady High School has been put on hold even though reducing speeds near these major destinations would protect thousands of tourists, residents, parents, and students who visit these places on a daily basis.

City leaders have failed to take action that would move these projects forward.

Our repeated calls for safety and protection in the bike lane and on sidewalks and high-traffic corridors are not unique to Atlanta. Demands for low-cost steel bollards at vehicle access points on the Hudson River Greenway date back as far as 2006. When it comes to projects like Marietta Street and Monroe Drive, we have the money and public support. Now, all we need is the political will to drive these projects forward - and build the best infrastructure to counter the worst intentions, as well as the most common crashes.