Bike Sharing Coming to Atlanta in 2015 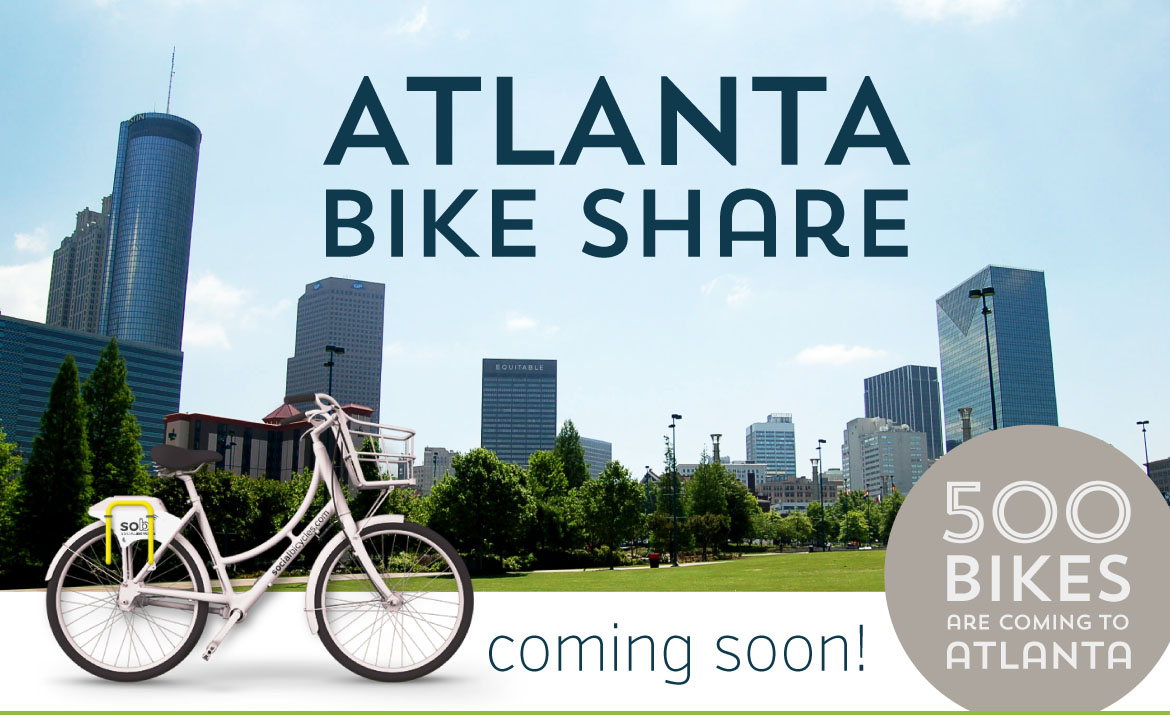 This week the City of Atlanta and Mayor Kasim Reed announced the launch of Atlanta Bike Share in 2015.

We are very excited to hear this news after many years of hard work on the project and can’t wait to see more people on bikes on the streets of Atlanta!

In 2012, the Atlanta Bicycle Coalition received a grant from the Atlanta Falcons Youth Foundation to conduct a feasibility study of bike sharing in Atlanta and Decatur. We're happy to see the recommendations from our 2013 feasibility study go from plans on paper to living, rolling reality. Read the plan here.

“Bike share isn’t really about biking,”says Rebecca Serna, Atlanta Bicycle Coalition Executive Director, “at least not the way we've traditionally thought of it in Atlanta. It’s about giving people a way to make short trips and errands simple and fun. Bike share will also make transit better by extending what you can reasonably get to from MARTA rail.“

How will it benefit you?

What about bike lanes? Is there infrastructure to support bike share?

With more than $32.5 million going to complete streets and bike projects dedicated on the infrastructure bond(which is up for vote on March 17th), we have the opportunity to build a safe and connected network of bikeways that will attract bike usage. With more people on bikes on our streets, it becomes even more important to make it safer for all road users in Atlanta.

Boston, which is home to the very successful Hubway bike share program, started with virtually no bike lanes when bike share started. “They were really, really far behind as far as having that network and infrastructure," Executive Director Rebecca Serna told WABE. "But what they were able to do was take the interest that bike share sparks and use that demand and momentum to build that network.”

What does it mean for biking and equity in Atlanta?

There are a lot of potential bike share users out there in Atlanta. We want to make Atlanta the proving ground for the concept that bike share can work for everyone. The Atlanta Bicycle Coalition welcomes any ideas to make that happen.

How will bike share affect visitors’ experience in Atlanta?

Bike share makes your experience in a new city more memorable. What you see from the bike is going to stick with you better.

Bike share benefits local businesses and attractions because it’s more flexible than other ways of getting around. Picture this: you’re visiting Midtown Atlanta and you spot a bike share station and decide to give it a try. Soon, you’re pedaling down Peachtree Street. You spot the Fox’s marquee, or the High or Moda, a cafe you want to try. Instead of having to find and pay for parking, you just hop off the bike, lock it up, and drop in.

This holds true for people who live here too - biking eliminates the hassle of driving in the heart of a city. Instead of sweating the details, you’re feeling the wind on your face.

Visit AtlantaBicycleShare.com for more information about the program and to request a bike share station location. Read our feasibility study here.