Save the Dates: Atlanta Streets Alive 2019

When the Atlanta Bicycle Coalition launched Atlanta Streets Alive in 2010, we set out to shift Atlanta’s culture. We wanted to inspire Atlantans to re-envision and reclaim our city streets as spaces for people. Now, eight years, 25 street activations, and almost 70 miles of open streets later -- energized by deepening community support, Atlanta Streets Alive has evolved. A modest, interactive tactical urbanism demonstration that attracted 5,000 participants for its debut on Edgewood Avenue has become an award-winning initiative that can draw over 130,000 people at a time onto some of Atlanta’s most familiar streets. Atlanta Streets Alive has been embraced by Atlantans as part of our city's cultural signature.

Here’s how -- with your support -- we’ll harness that energy and momentum to transform Atlanta streets into healthy, safe places that foster civic pride and community in 2019. 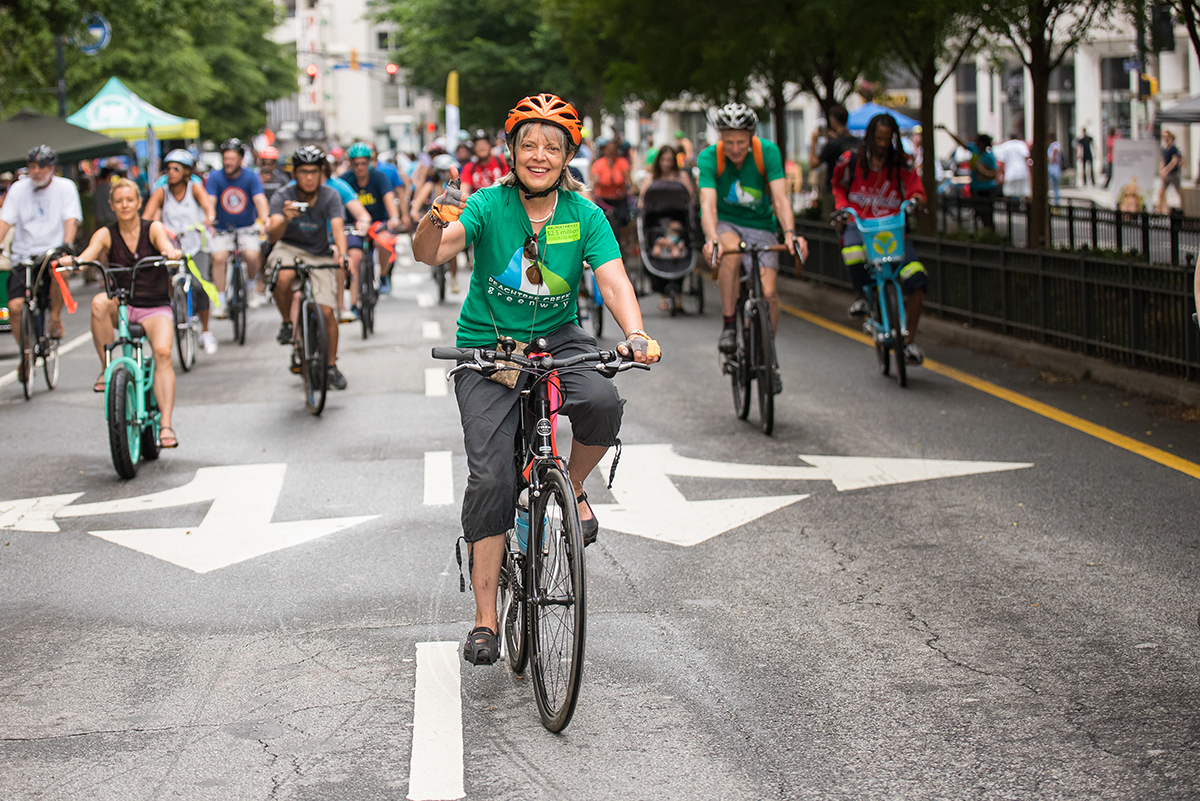 Atlanta Streets Alive - Central, the flagship of our open streets initiative, will return on Sunday, April 7, 2019 for its sixth consecutive year on Atlanta’s most iconic street!

In recent years, Peachtree Street has consistently attracted over 100,000 people who roll, walk, bike, skate (and, yes, now scoot) through Midtown, Downtown and South Downtown during each Atlanta Streets Alive. All of this mobility and demand has demonstrated to City leaders that Peachtree Street is ready for its next act.

And, as a result, Atlanta Streets Alive - Central has become one of the most engaging ways to test ideas that will make traveling on Peachtree Street by any mode of transportation safer and less stressful. During our 2018 activation of Peachtree Street, Atlanta City Studio made it possible for participants to interact with a bold concept from the Downtown Atlanta Master Plan, a shared street. Back in 2016, after we temporarily redesigned a section of the street to show how adding protected bike lanes would fit, 99% of Atlanta Streets Alive survey respondents said they would visit Midtown more often if they had parking-protected bike lanes on Peachtree Street.

In fact, the most common refrain we hear is “I wish Atlanta Streets Alive was every day.” If you continue to show up in record numbers to Peachtree Street in 2019, maybe one day it will be.

Biking down DeKalb Avenue during Atlanta Streets Alive - Eastside this year was eye-opening for a lot of people. Over and over, participants shared how the experience sparked their realization of what a useful route this would be if it were safe and accessible for walking and biking. In its first year of connecting neighborhoods along Marietta Street and Howell Mill Road, Atlanta Streets Alive - Westside had a similar impact. Residents thanked us for allowing them to have a peaceful moment next to the Water Works Reservoir rather than being stuck in their cars, feeling stressed and anxious about traffic.

Atlanta’s cultural shift from car-centric to people-powered is starting to reflect in its street design. During the 2018 Westside street activation, we held a ribbon cutting with the City of Atlanta for the Marietta Street improvements, including bike lanes on the stretch north of Ivan Allen Jr. Boulevard. Meanwhile, for DeKalb Avenue, plans to extend the multi-use trail that currently ends at Rocky Ford Road and remove the reversible lane are advancing. The type of safe access for people outside of cars that Atlanta Streets Alive allowed us all to experience and envision on this corridor is taking shape.

You probably noticed these two routes (and all our 2018 routes) met in the middle, at Five Points -- intentionally connecting neighborhoods and business districts to the heart of Atlanta. But, have you ever tried to get across town, from East Lake to the West Midtown district?

While a mere nine miles, even in a motorized vehicle, it’s a daunting haul that feels disconnected. We want to replace that feeling with an unforgettable open streets experience.

That’s why, on Sunday, June 9, we’ll combine our Eastside and Westside routes into one slightly audacious and delightfully cohesive Atlanta Streets Alive - Cross-City.

But, wait. There’s even more in store for our June activation! Not to miss out on the fun and connectivity, the City of Decatur will launch its first open streets by adding West Howard Avenue to the mix, bringing the newest addition to the Atlanta Streets Alive lineup to almost 10 miles. You’ll be able to roll or walk all the way from Underwood Hills to Decatur! We’re going to need more time for this one, so we’re extending it to six hours of open streets, from 2:00 pm to 8:00 pm.

History, culture, spirit and pride are dominant themes in Atlanta’s southwest neighborhoods and communities. Another reality of life in Southwest Atlanta? The greatest exposure to fatal or serious injuries from traffic collisions.

Six out of the 10 Atlanta streets with the highest rate of serious injuries are located west of Northside Drive and south of Martin Luther King Jr. Drive.

And, this is also where neighborhoods have some of the lowest sidewalk coverage in the city -- yet have higher rates of walking and transit usage as well as lower rates of vehicle ownership.

Safe and complete streets improve connectivity to transit, healthcare and other services, social and recreational destinations, jobs and schools. Whether we are advocating for bike lanes, safe crossings or Complete Streets, all streets in our city should be safe for all people. Safe, complete, and inclusive streets call for community engagement -- that’s why we are asking the community members of Southwest Atlanta to help us select a route for a September 29 Atlanta Streets Alive that will mobilize community support for the transformation of Atlanta’s High Injury Network streets into livable, accessible and equitable public spaces that strengthen and connect our communities with opportunities to thrive.

The route selection process starts now! Are you a resident of Southwest Atlanta? We want your participation. Here’s how you can make a pitch for an Atlanta Streets Alive - Southwest that will have the best impact for your community:

It’s up to you. Will the West End recapture the energy generated by past routes on Lee Street and Ralph David Abernathy Boulevard? Will the NPU-X neighborhoods collectively mobilize to move Atlanta Streets Alive to one of its key corridors? Or, will an appeal for bringing the open streets experience to Adamsville spark a movement? We can’t wait to find out!

Save the Dates and Donate 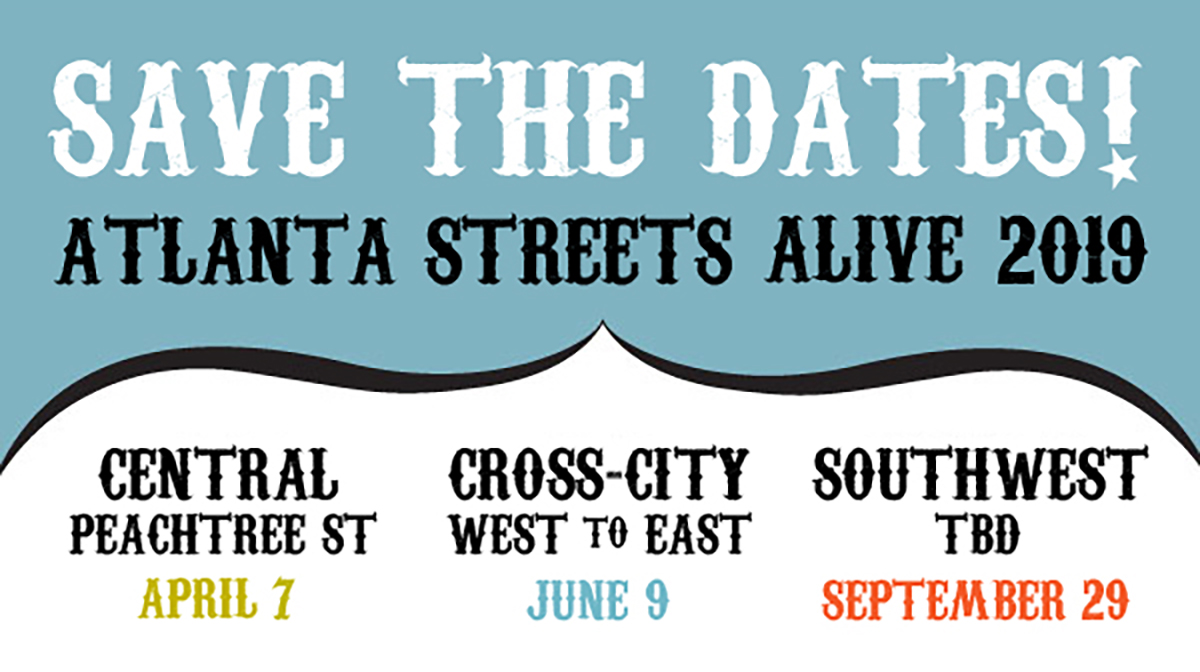