We need your help to launch the next era of Atlanta Streets Alive: tell our Councilmembers we want a car-free Peachtree Street every Sunday!

Atlanta City Council is considering legislation that would launch the next era of Atlanta Streets Alive: tell our Councilmembers we want a car-free Peachtree Street every Sunday! 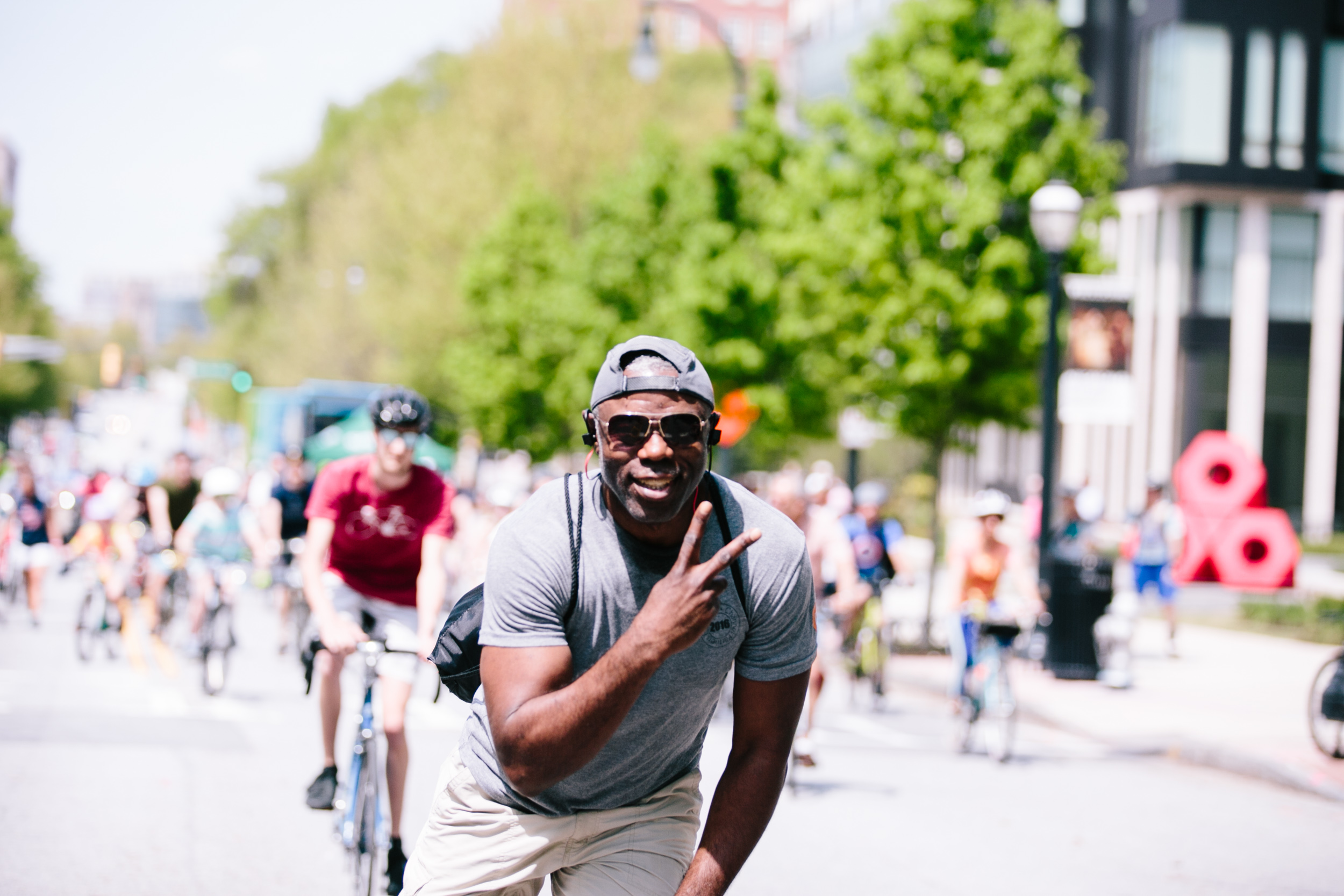 Living in Bogotá, Colombia for a year during grad school was a life-changing experience for me. I didn't write the perfect paper about TransMilenio or succeed in my Spanish-language transportation planning class to the extent I had hoped, but I did experience Ciclovía. Every single Sunday.

I biked through it at first while barely registering it, just that something was different about Sunday compared with other days of the week. Later, it became a foundation for a good Sunday—you might do a lot of other things but you’d get there in a calmer state of mind because of Ciclovía. But once I got back home to Atlanta, I realized just how powerful that simple concept was. Take a car-congested, noisy and polluted street, and one day a week, turn it over to people. That's Ciclovía!

Back home, I took a job at the Atlanta Bicycle Coalition and was constantly asked how I could be foolhardy enough to ride a bike in such dangerous conditions. I thought we needed something dramatic to shift the focus from people's justifiable fear of being hit by cars and towards the joy of being a person propelling themselves through the city, rolling or strolling down the middle of a street.

The first time we opened Edgewood for people, in 2010, just six months after a committee of tenacious volunteers started dreaming about car-free streets in Atlanta, it was pure exhilaration. The whole thing almost didn't happen — saved at the last minute by the enthusiasm of an Atlanta City Councilmember, so it was doubly rewarding when it did. Standing outside the Hurt building downtown, I can still recall how weird it was to hear a bird and little else. We kicked things off with a salsa lesson at Woodruff Park led by a Colombian dance studio, in honor of the Colombian roots of Atlanta Streets Alive.

Over the years, the crowds grew but one thing remained the same: after or even during each Atlanta Streets Alive someone would wonder, “why can’t we do this every Sunday?”

That simple question is at the heart of this legislation. Why can’t we do it every Sunday? Why can’t we dedicate one street, one day a week, for people to move without fear down the street? To stop and talk with a friend they haven’t seen in a year. To sit on a curb and watch neighbors whiz by, grinning for all the world to see.

This legislation will bring an eleven-year-old dream to life.

I’m so grateful for this moment and for all the people who got us here: the staff who worked tirelessly to create Atlanta Streets Alive and then do it again and again, the volunteers who didn’t go home until the last trash can was collected, the neighborhood leaders, communities, partners, donors, sponsors like Mailchimp, Newport, Rei, Custom Signs Today, and Georgia Bike Law, and last but not least, elected officials who got the vision... you’re all why this moment has arrived. Let’s make the most of it!

21-O-0775: "An ordinance by Councilmembers Amir Farokhi, Andre Dickens, Michael Julian Bond, Jennifer Ide, Natalyn Mosby Archibong and Matt Westmoreland launching the next era of Atlanta Streets Alive and authorizing the temporary closure of Peachtree Street between Mitchell Street and 17th Street each Sunday from 2:00 PM to 6:00 PM beginning on September 18, 2022." You can read the full proposed ordinance here.

So many people have made Atlanta Streets Alive happen over the years — thank you to everyone! Special thanks to the Atlanta Bicycle Coalition staff who dedicated so many of their days, nights, and weekends to creating this initiative. 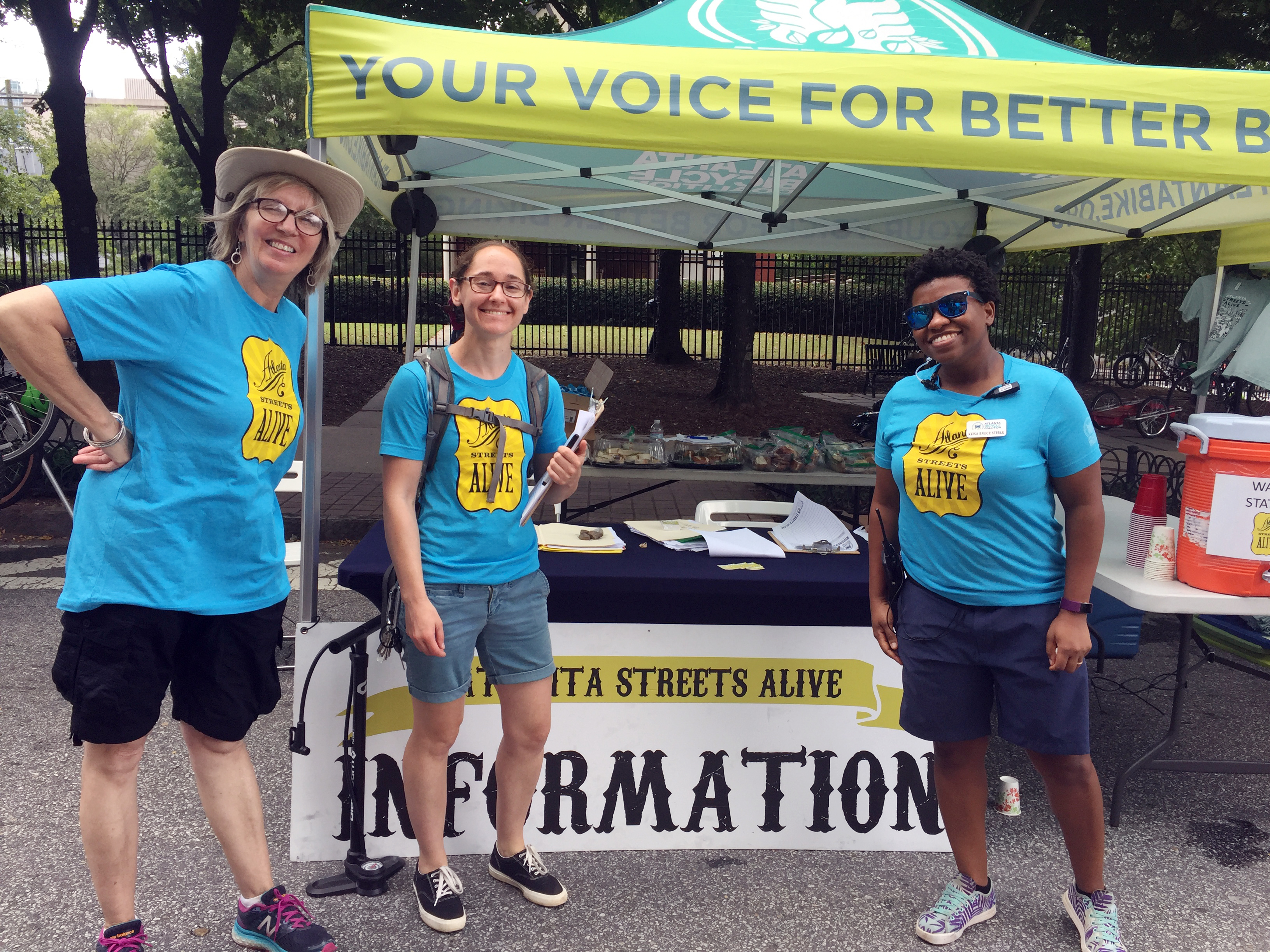 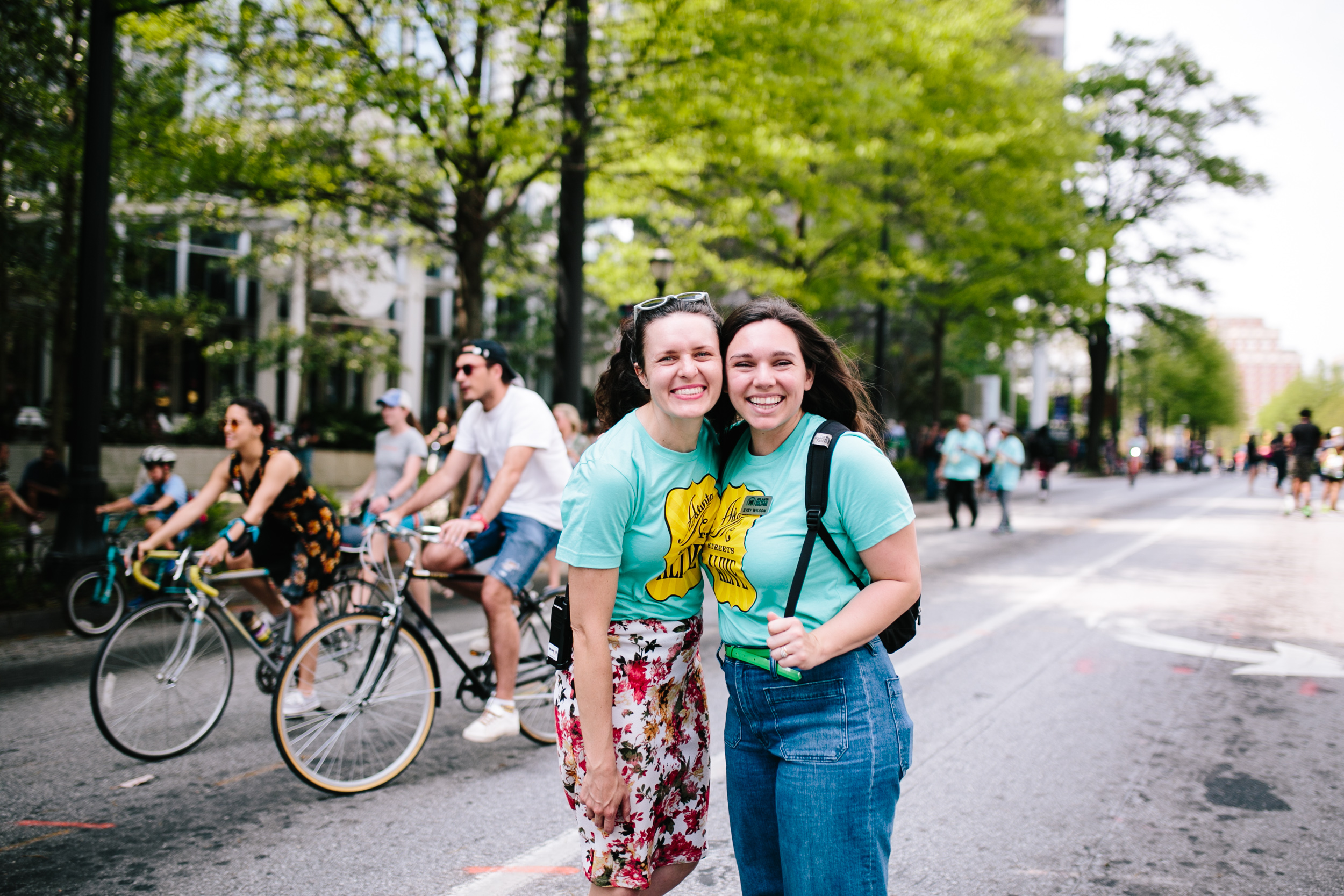 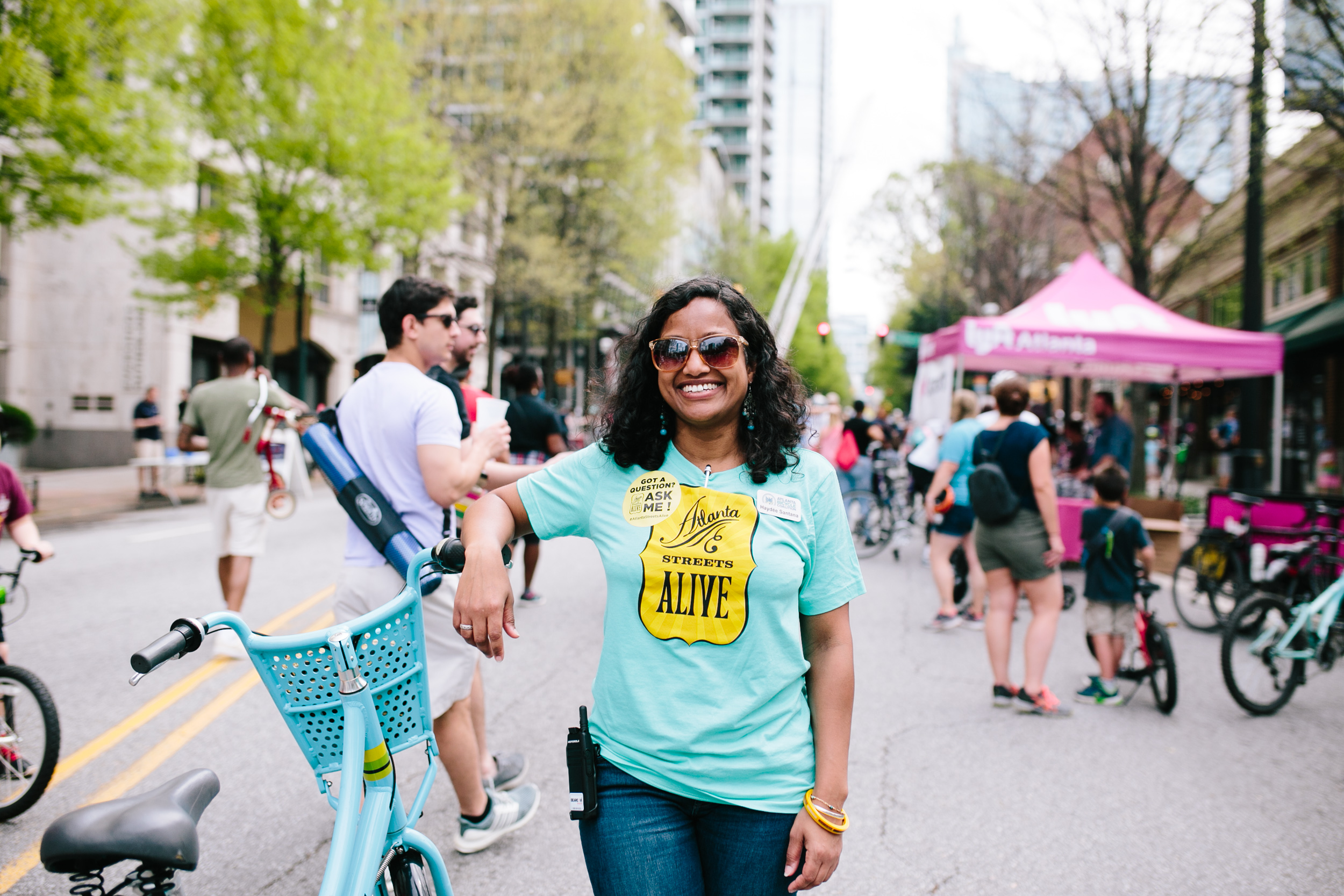 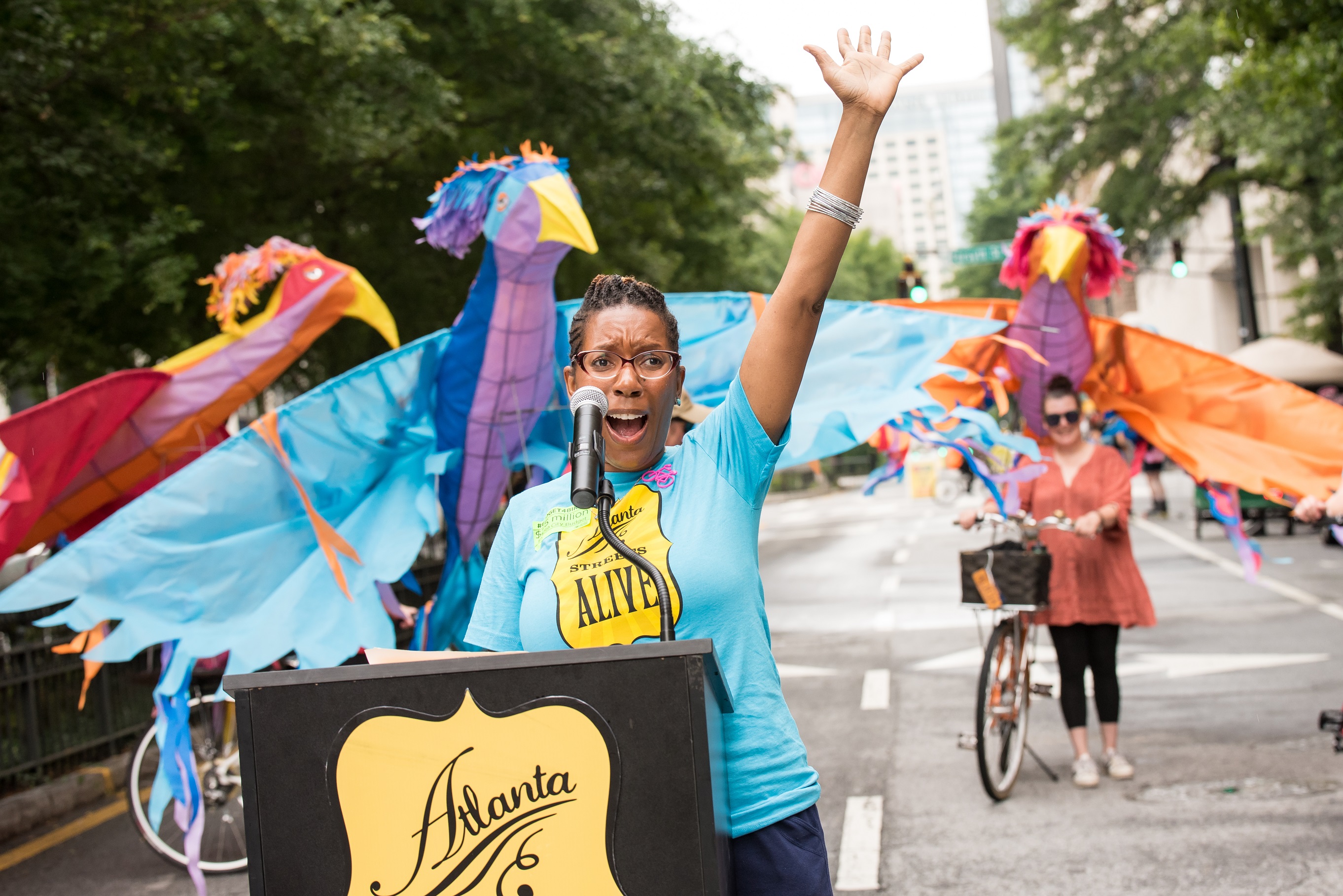 Sagirah Jones with Chantelle Rytter's Phoenix Bicycles in the background 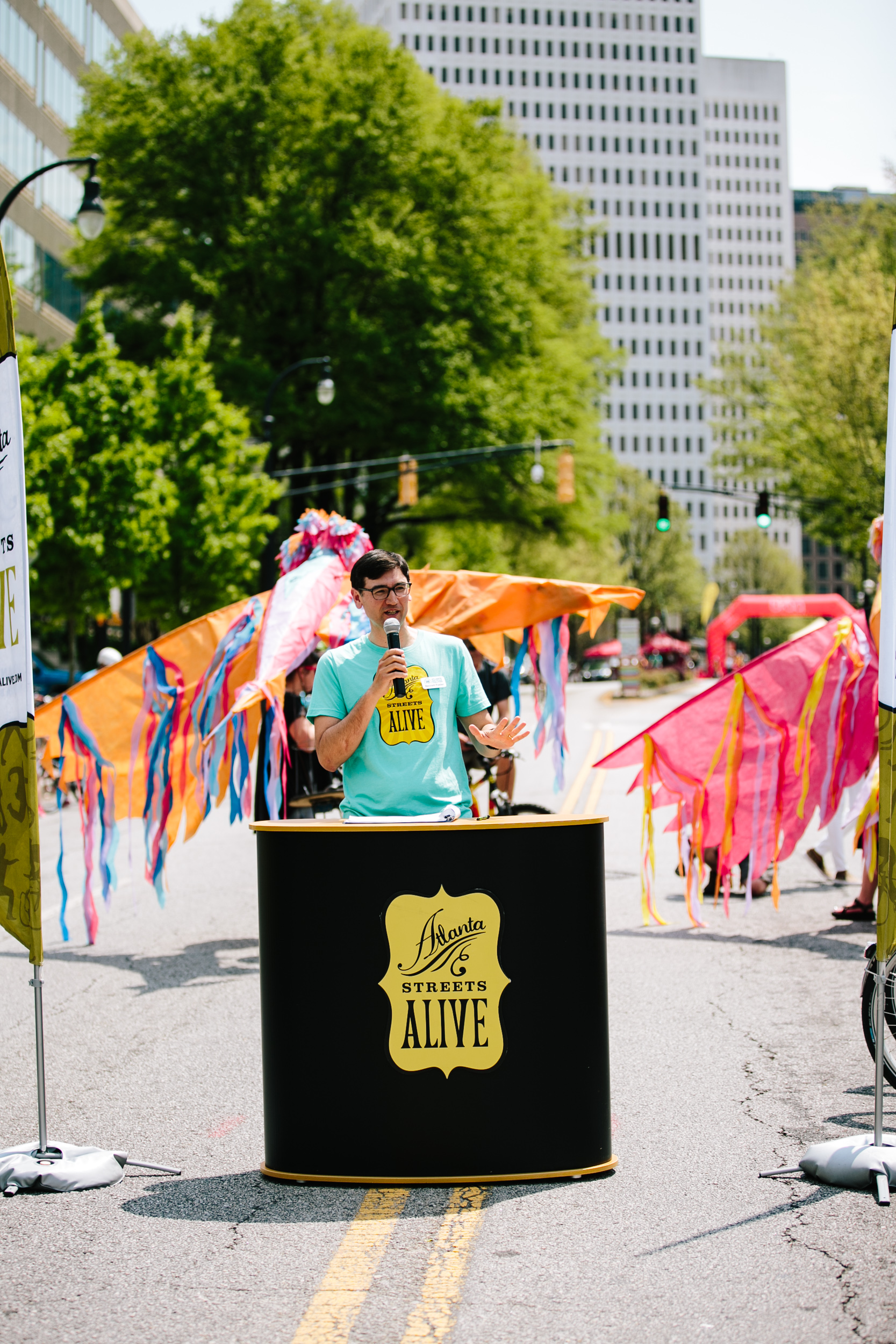 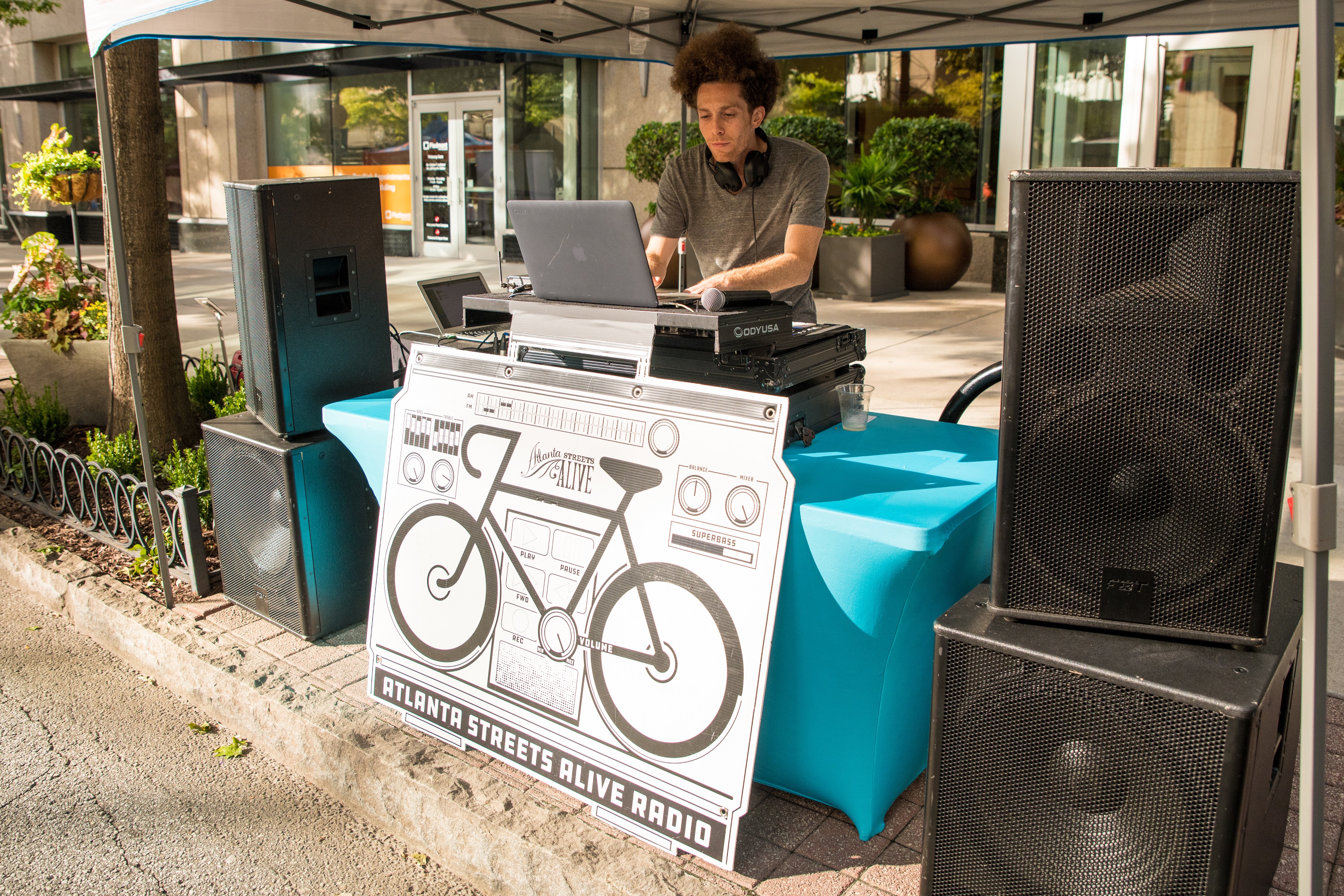 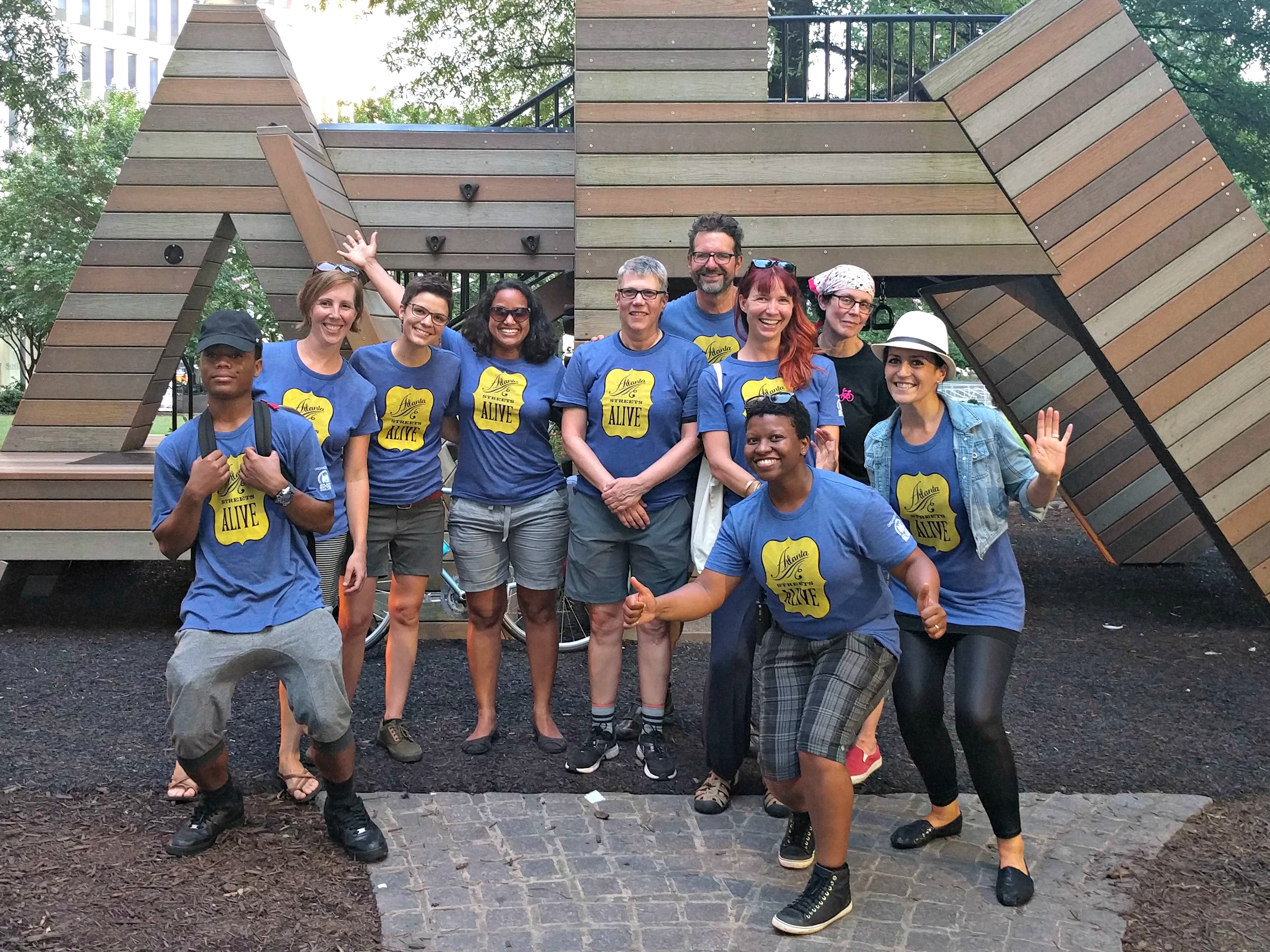 And of course, we could never have kept this up for a decade without such dedicated, tireless, and FUN volunteers! 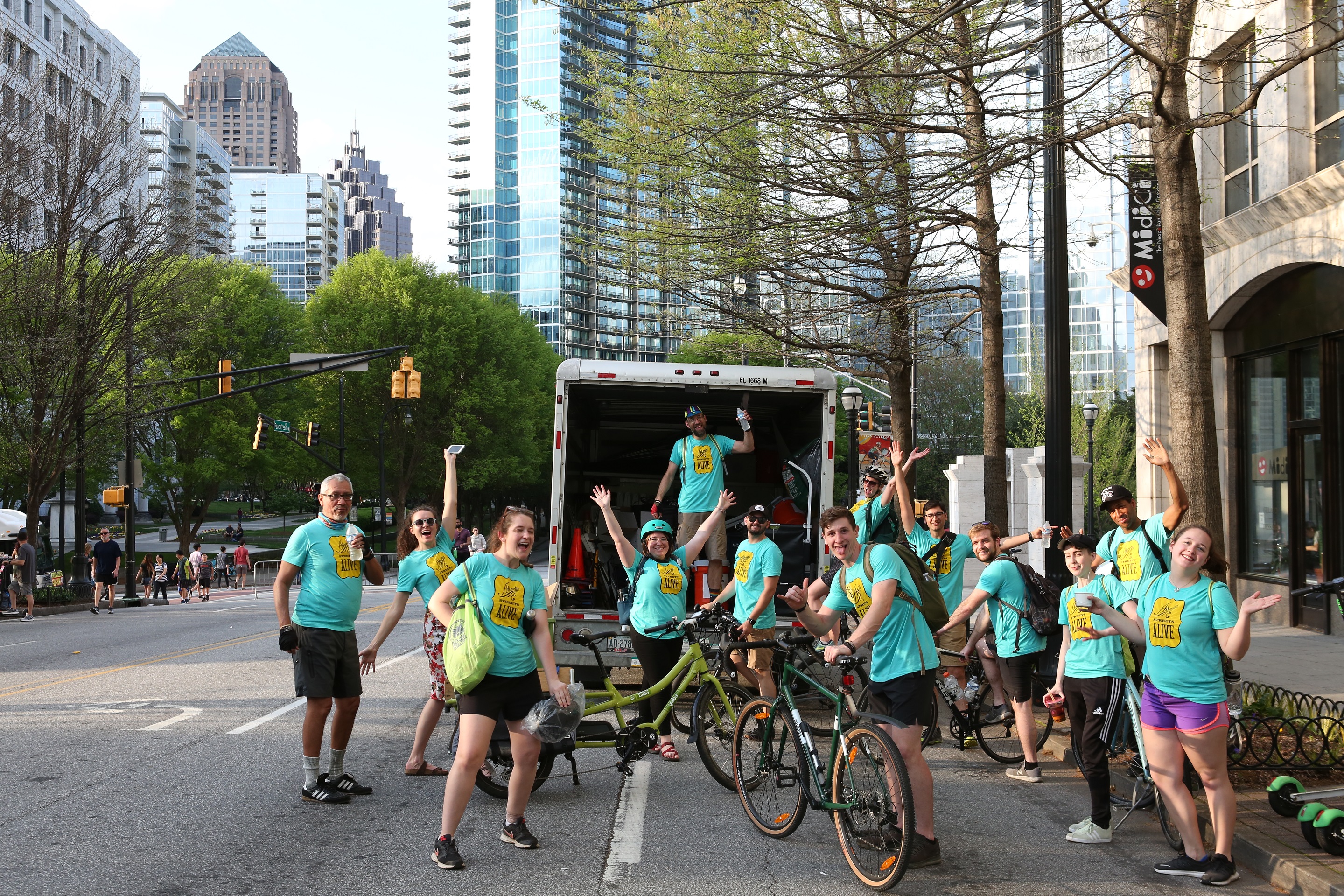 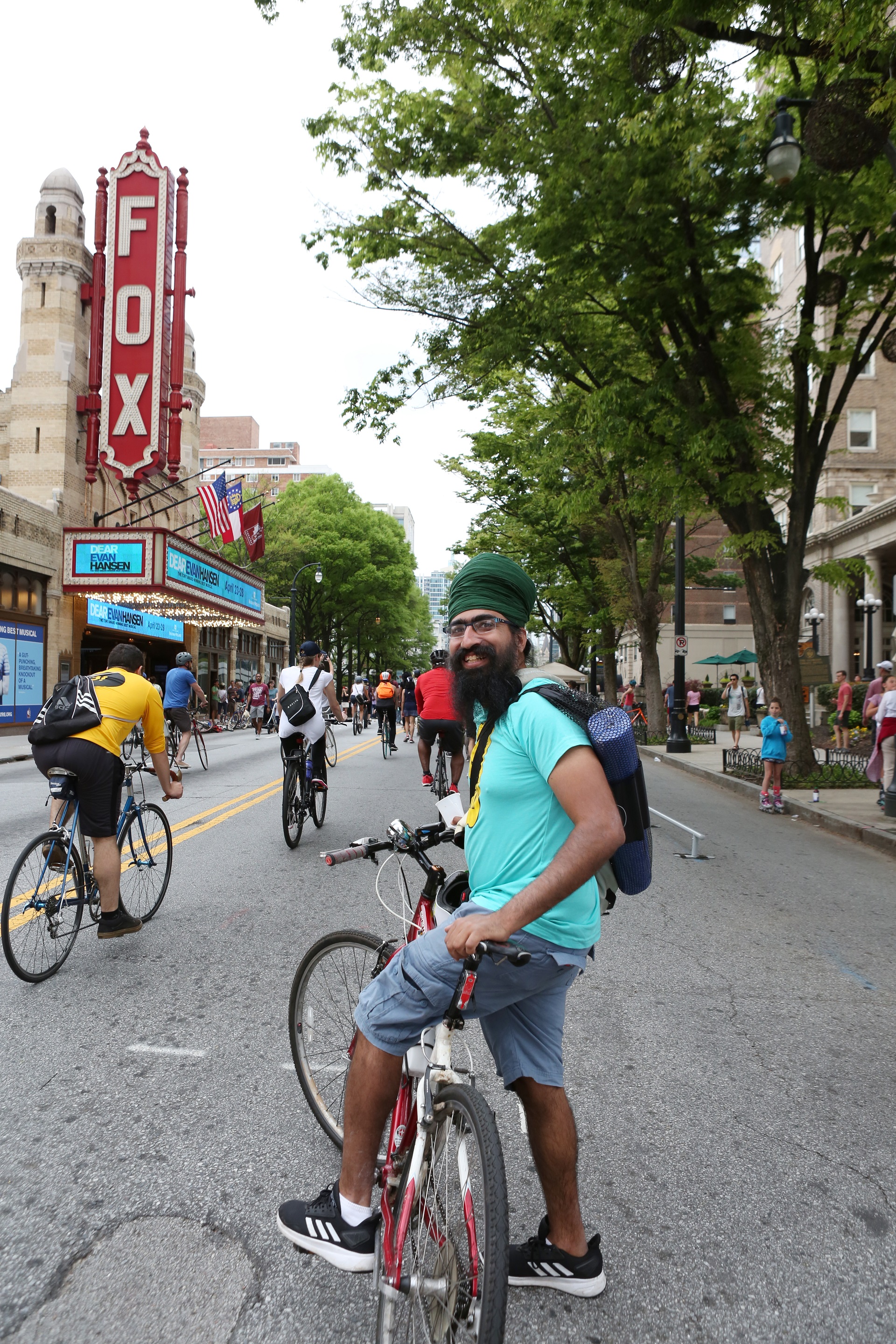