The Atlanta Bicycle Coalition along with the American Heart Association, PEDS, MARTA Army, NPU-I, TransFormation Alliance, ThreadATL, Historic South Atlanta, Atlanta Families for Safe Streets, and more are lobbying the city of Atlanta government to set safe speed limits and adopt Vision Zero, an effort to eliminate all traffic fatalities and serious injuries. Legislation to allow the City to establish a 25 mile-per-hour speed limit on all neighborhood streets was introduced March 11th to the City Council Transportation Committee, which approved the ordinance unanimously March 25th. [Next, the legislation will likely be up for a vote by the full City Council April 20th. We'll update this post with details on how to submit your comment as we learn more.]

While applauding the step, ABC and its partners want to strengthen the legislation even further--Georgia ranks as one of the deadliest states for vehicular fatalities and Atlanta’s fatality rate is three times higher than of peer cities like Boston and Seattle.

“After years of pushing for safer streets, we applaud the city of Atlanta taking an important step towards adopting Vision Zero and implementing a reduced speed limit on local roads,” said Rebecca Serna, executive director of the Atlanta Bicycle Coalition. “I think all Atlantans can agree that no one’s life should be at risk while trying to simply get to their next location.”

Data shows the speed of the vehicle played a leading role in the 73 Atlanta traffic fatalities that occurred in 2019.

“Of the 73 fatalities last year, 22 were pedestrians. Yet today, I am more hopeful than ever before that the city is on the right path to ending all traffic violence as it moves to adopt Vision Zero. PEDS believes that the way to achieve zero traffic violence is by taking the first logical step of reducing the speed limit to 25 mph on all city streets. The urgency is now, particularly in underserved communities where most pedestrians with no other transportation options are dying at a higher rate,” said Cathy Tyler, president & CEO of PEDS.

The legislation is an important first step towards a safer future, but the default city speed limit of 25 mph in the current language would not apply to widely-used roads including collector streets (e.g. Atlanta Student Movement Blvd) and minor arterials (e.g., Cascade Road).

ABC and its partners are calling on the City to ensure the legislation includes these important streets, and citizens are contacting their Councilmembers to show their support for a reduced speed limit. Collectors are more like local roads and should be treated similarly, and many intown arterials have high numbers of people walking, using wheelchairs, biking, or scooting. 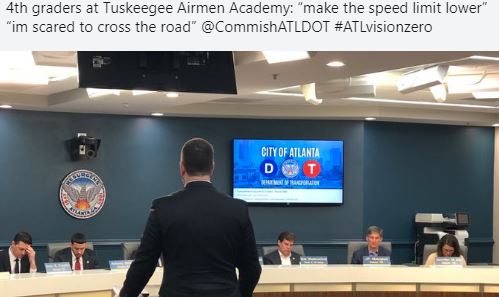 Although this could create a conflict with the state list of roadways approved for use of speed detection devices, the evidence indicates the tradeoff is worth it. Cities across the country are seeing a reduction in traffic fatalities as a result of lower speed limits. Conversely, there is a lack of conclusive evidence that occasional traffic enforcement is effective at reducing speeds. ABC and its partners stand ready to work with Atlanta and the Georgia Department of Transportation to prioritize the safety of Atlantans in every corner of the city.

“I commend the adoption of Vision Zero as the official framework for change,” said Thomas Hyneman of Atlanta Families for Safe Streets. “This safe-speeds ordinance is an excellent step forward. However, now we must be vigilant and active in ensuring the passing of this ordinance by the City Council. The privilege of driving in Atlanta requires accepting safety measures. Those who object to reducing speed limits demonstrated to save lives should let us know how many fatalities are acceptable during your commute. ”

For media inquiries, email us.