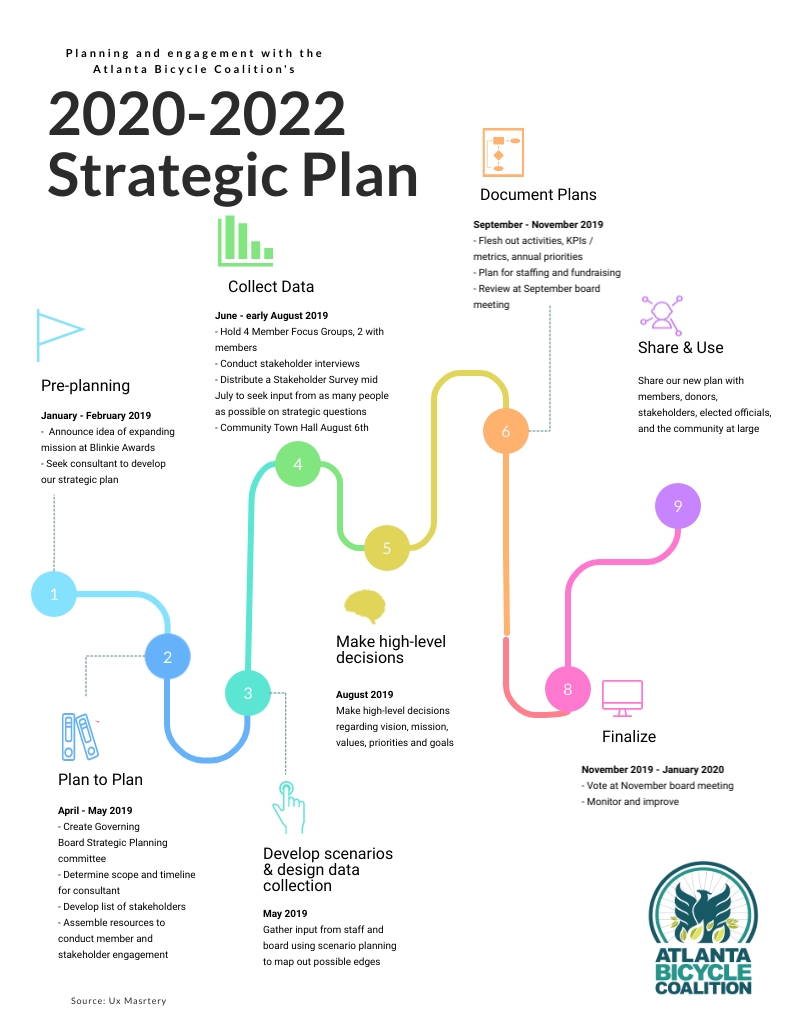 In 2017 we adopted a three-year strategic plan with the following mission: to transform Atlanta into a more livable, accessible city by making biking equitable, safe, and appealing. We intentionally placed the emphasis on the outcome we wanted to achieve -- a more livable, accessible city -- with equitable, safe, and appealing biking being our tool to achieve that goal. At the same time, we made a commitment to equity, diversity, and inclusion.

As we forge into the third and final year of our current strategic plan and embark on the path to determine the most effective direction for the next three years, we are considering expanding our mission. Specifically, we are contemplating a direction that would put biking on equal ground with other transportation options, generate equitable and inclusive mobility outcomes, and, ultimately, propel biking further, faster. Skip to the end of this page to read why we're thinking about this.

1. Why are we thinking about this?

Because we’re in a dramatically different environment from 2016 when we last updated our strategic direction. Here are some of the key factors that have led us to consider expanding the scope of our mission:

An overwhelming demand for transportation options beyond cars has flooded Atlanta’s streets in the form of people on scooters and electric-assist bikes. The City is acutely aware of the need to accommodate this surge in micromobility options. The burgeoning public interest in the infrastructure and policies to support the widespread adoption of personal mobility devices presents an opportunity for us to rally even more voices calling for investments in safe streets. And, as we’ve learned from nearly a decade of Atlanta Streets Alive, a safe city street environment where people are the priority not only encourages active transportation but also makes biking significantly more appealing.
Safe streets are bikeable streets. Research and common sense indicate that people won’t bike unless they feel it’s safe to do so. In 2018 we learned about the High-Injury Network, on which less than eight percent of Atlanta's streets account for 88% of traffic fatalities. Neighborhoods where the most dangerous streets are concentrated -- areas of the city west of Northside Drive and south of I-20 -- also have more black residents, lower median incomes, more people commuting to work on foot and transit, and fewer cars per household. Until we address these most dangerous streets, we won’t be able to achieve the safety in numbers that comes when streets are safe for all modes.
In a sprawled city and region like ours, transit access makes it easier to get places by bike, and having good first-/last-mile connectivity options makes transit work better, too. The Cycle Atlanta Plan phase 2.0 emphasizes the importance of these connections. Impending state and regional investments in transit present important opportunities for transit expansion that enhances connectivity and an urgent need for advocates for an inclusive transportation network to be organized and at the table. As the region’s largest staffed mobility advocacy organization, should we be those advocates?

2. Have any other bicycle advocacy organizations made this switch?

3. If this change is made, will the Atlanta Bicycle Coalition still advocate for better biking?

Yes, absolutely. We will continue all of our current bicycle advocacy work, and we will expand our staff and funding so we can focus on new areas of advocacy.

4.  Are any other bike advocacy organizations currently considering mission expansion?

Yes, we've heard from peer organizations that several are considering joining forces with other forms of mobility and active transportation in order to strengthen their advocacy.

5. How might this change affect the Atlanta Bicycle Coalition's programs? (You’re not going to get rid of Atlanta Streets Alive, are you??)

There may be some changes to programs--we can’t know for sure until we make a decision. Funny you ask about Atlanta Streets Alive, though. We intentionally didn’t make it a biking event because we wanted the event to include anyone in Atlanta who was willing to move around the city without a car. We feel that this multimodal approach has been essential to Atlanta Streets Alive’s success, which has really built up our audience--even among those people who wouldn’t label themselves “bicyclists.”

We also plan to keep our bicycle safety programs--City Cycling, Bike Champions, Shifting Gears, and True Beginners--all the programs that are at the core of what we do for bicycling in the city.

6. How can the Atlanta Bicycle Coalition expand its mission to include other topics and people when bicycling still has so many hurdles to jump in Atlanta? Shouldn’t we focus on bicycles?

We believe that we still have a long ways to go when it comes to making Atlanta a great place to ride a bike. We believe expanding our mission could help us achieve our goals around biking more quickly, by building a more powerful coalition for the changes we want to see in Atlanta’s infrastructure, culture, and daily life. This is about doing more for biking, not less.

7. Does it really matter what the mission statement says? Isn’t this process a waste of time and resources?

The mission statement matters because it guides and shapes our advocacy, programs, and initiatives. We are considering expanding our mission during this year’s strategic planning process, which happens every three years.

8. How might this impact other mobility advocacy organizations in the city?

We value partnerships greatly and have a lot of respect for our sister organizations in this space, so their feedback will be an important consideration as we contemplate mission expansion. Our hope is that if we are able to grow in this direction, it will support their work and create larger audiences for their efforts.