No More Memorials on Memorial Drive

Barbara Crawford was killed while trying to walk across Memorial Drive from Campbell Street, on her way to the store. The setting sun was bright, casted a warm glow.  Residents of Memorial Drive neighborhoods stood in a circle in the parking lot of Peter’s Food Shop, next to a lawn-mower repair shop. 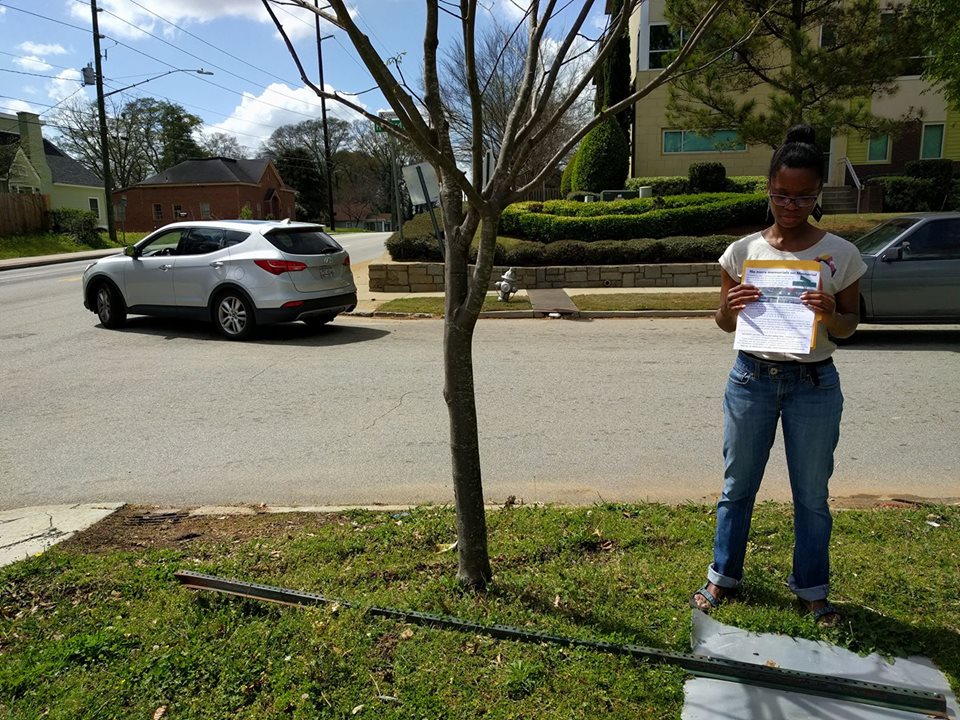 Nedra Deadwyler stands at Memorial Drive near where Barbara Crawford was hit and killed crossing the street.

Ms. Barbara had not lived in Kirkwood in the past two years but lived in the little white house on Campbell street for five before that. Ms. Kate at the house on Campbell recounted how she tried to gather Barbara’s information so she could locate her family, with no success. Ms. Kate has difficulty hearing and seeing so relied on others to assist her in the process.

Two dozen community members and friends of Ms. Barbara came out for the “No More Memorials on Memorial Drive” rally and memorial service. Attendees identified their neighborhoods as Kirkwood, East Lake, Reynoldstown, and Grant Park - all neighborhoods that run along Memorial Drive, a state road connecting Downtown Atlanta to Stone Mountain.

At the gathering, the names of the two women who were involved in crashes on Memorial. The other was Ashley Tewell, who in January was in a high-speed car crash resulting from a police chase that began Downtown and ended in Kirkwood. The fleeing car crashed and hit Ashley’s, killing the mother and injuring her 7-year-old daughter.

There were many people in the group who knew Ms. Crawford personally and shared memories, offered prayers, and commented on the horrific event that ended their friend’s life.  Other members, newer residents to Kirkwood, and those who witnessed the crash (and other crashes) spoke up and shared.

Statistics on safety conditions of Georgia’s roads were noted - according to the Georgia Department of Transportation, crashes are up 33% over past 2 years. In 2016 1,559 were killed, 127 more than 2015. 65% of crashes were caused by failure to maintain lane, and 50% were single vehicle crashes, 15% pedestrians, and 13% motorcyclist and bicyclist.

For neighbors of Memorial Drive, from Downtown to East Lake, these are life or death issues with higher driver speeds, poor visibility, and lack of adequate pedestrian crossings

Greg Giuffrida, with Imagine Memorial (commissioned by District 5 Councilmember Natalyn Archibong), gave a recap of what is happening on Memorial Drive and shared a letter calling for a road diet to reduce speeds, make crossing safer, and other safety improvements. Greg is the contact for long-term plans along the Corridor, although he does not have control over the ultimate design decisions - on state routes, those are made by the Georgia Department of Transportation.

Community members were encouraged to speak up for safety improvements in the corridor.

The gathering concluded after Corey, who had shared a home with Ms. Barbara at one time, said a prayer. He prayed for the safety of all living things, including “those on your left and those on your right.”  We taped a memorial sign to the street pole outside of Peter’s Food Shop and decorated it with flowers. Neighbors stood around making introductions, exchanging hugs, signing up to get involved and call for the safety improvement neighbors want to see on Memorial.

TELL GDOT and the City of Atlanta we want reduced speeds on Memorial Drive. We want a "road diet", center turn lane, sidewalk buffers, and safe crossing, and to get rid of the reversible "suicide" lane.

You can also write to Georgia Department of Transportation at One Georgia Center, 600 West Peachtree NW, Atlanta, GA 30308. Then email Atlanta City Councilmember, District 5 <[email protected]> to express support for the road diet (she's in favor of it).