Interview with Dantes Rameau of the Atlanta Music Project

Dantes Rameau lives in the Pittsburgh neighborhood of SW Atlanta and runs the Atlanta Music Project, a nonprofit that provides intensive, tuition-free music education for underserved youth in Atlanta. Read on for our interview with Dantes, and his take on "human scaled transportation." 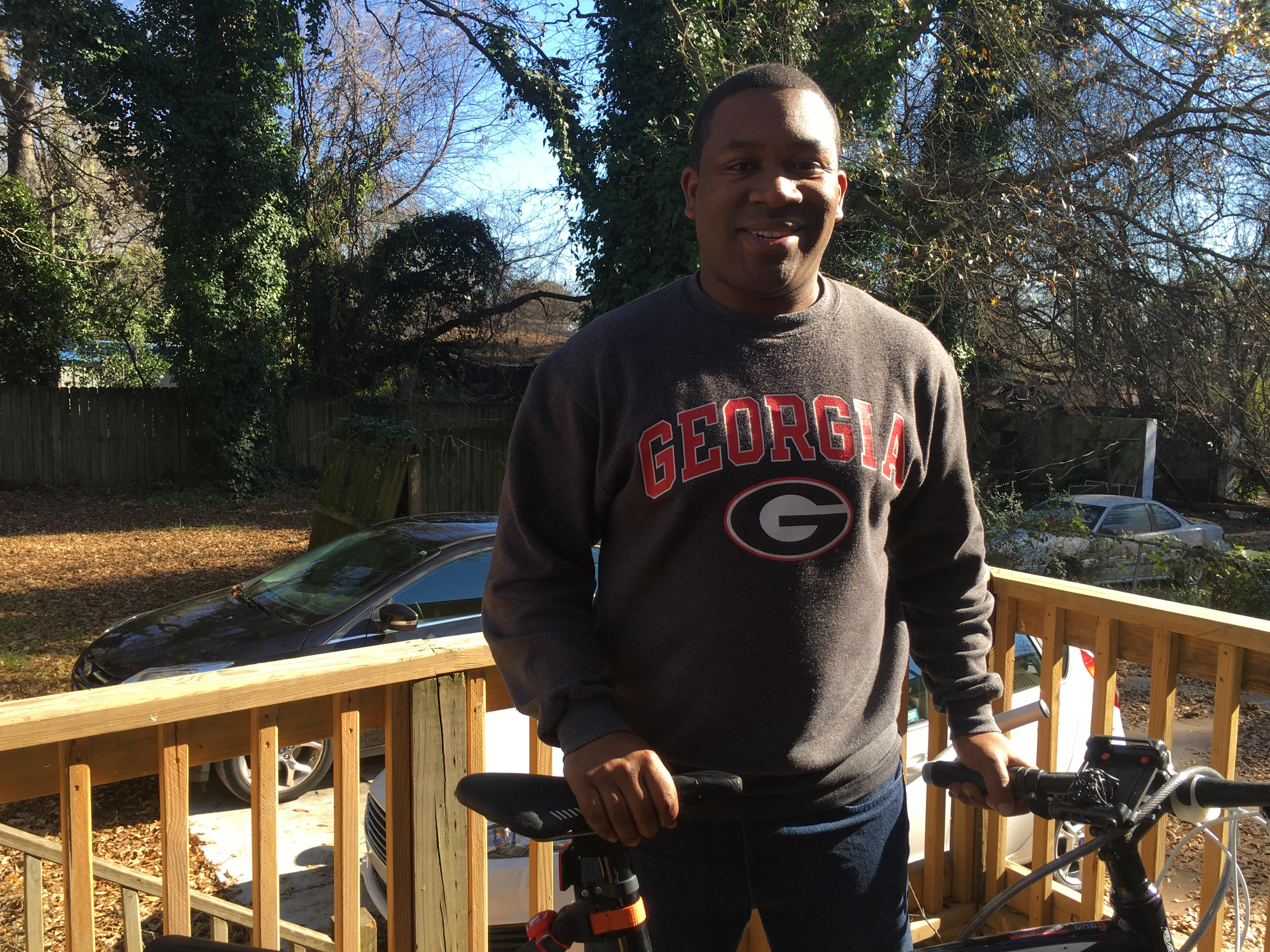 Where are you from, where do you live, what do you enjoy, how do you spend your time?

I was born and raised in Ottawa, Canada. I went to undergrad at McGill University (Montreal) and moved to the states for graduate school - Yale (New Haven), Carnegie Mellon (Pittsburgh), then Boston for my last year at the New England Conservatory. I was pursuing music studies (I’m a classical musician, my instrument is the bassoon) and I mention all those cities because I biked a lot and they all had really good infrastructure for biking.

I didn't have a car until I moved to Atlanta and realized, if I'm going to get anything done here, I have to have a car. I co-founded the Atlanta Music Project, a nonprofit that provides intensive music education for underserved youth right in their neighborhoods. We give them the instruments, the classes, and the performing opportunities, and all we ask for in exchange is that they commit to coming to all of our classes. So it's a pretty strict requirement, but we have really dedicated kids that wouldn't have access to music if it weren't for AMP.

When I moved to Atlanta I first lived in Lawrenceville. I didn't have a bike and drove everywhere, and I remember having to down energy drinks just to make it home without falling asleep in the traffic. Finally I got an apartment in Cabbagetown and got a bike, but I really didn't use it that much - it just wasn't convenient for me to get to work (my office is at the Woodruff Arts Center) until the BeltLine Eastside Trail came along. Then it was about the same amount of time for me to bike to work using the BeltLine as it was to drive to work. So that's when I really started to bike a lot more.

More recently, I just bought a house in Pittsburgh / Adair Park. It's a great neighborhood and I've got a bus stop right in front of my house to get to the West End MARTA station very quickly. I'm excited about the Connect Atlanta Plan and the bicycle infrastructure that's going to be coming down Whitehall Street to Metropolitan Parkway. I'm hoping we can get a bike lane on Metropolitan connecting to Whitehall so I could have a nice ride to work and intown.

The things that I enjoy - biking, urban living, the diversity of the city, walking, outdoor spaces, cafes, bars - I'm a typical millennial. What persuaded me to buy a house in Atlanta was in large part the work being done to make Atlanta a more livable, walkable place. I'd love to not have to take my car whenever I go somewhere. Getting more on my bike helps me to keep in shape - I'm not the type of guy to go to the gym four times a week. I'd rather live an active lifestyle.

I enjoy the arts, obviously, I'm a musician, but I think when I saw the plans for the BeltLine, the Streetcar, and combined with the work the Atlanta Bicycle Coalition is doing, it really made me feel like there are people in town that have a vision for the city that is something I'm interested in committing to for a long time.

Why do you ride, what kind of riding do you do, how long have you been riding for, where do you ride, and how often?

I've just always ridden my bike. My hometown, Ottawa, had great bike infrastructure and public transportation. Even in the 90s, you could more or less get across the whole city using bike paths. My parents had a car but we rarely used it. I could walk to the grocery store, to school, hang out with my friends, hop on the bus down the street.. So a car for me was always an afterthought. My high school opted to give every student a free bus pass instead of using school buses, so public transit and biking infrastructure has always been a part of my life.

What do you wear when you ride - and does it matter?

I often wear whatever what I have to for the engagement I'm going to. I don’t have any biking clothes. In fact, I would bike to work a lot more if there were a protected bike lane where I could ride in what I’m wearing now comfortably, and ride slowly enough not to arrive sweaty.

Do you ride at night - why or why not?

Yes, with my ABC lights on my bike! I'm sometimes more comfortable riding at night because it seems harder for drivers to miss me because of the bicycle lights.

Do people want to ride bikes in your community - why or why not?

If I’m defining my community as people my age, then most people I know would love to be able to bike more places. I don't think anybody loves to drive - it's just that driving is super convenient. For example, my girlfriend biked in college, but here she drives to work. She's gone on a few local bike rides, but she doesn't have that much urban biking experience. Someone like that, you're not going to get her on a bike in the city streets unless she feels safe. On the BeltLine, she feels great, but off the BeltLine, she's not comfortable. It's convenience and safety, not weather or the hills, or the distance.

It's not like a style thing, “I ride a bike.” It's just the easiest way to get to the coffee shop or to the bar, and I don't have to find parking, as long as I'm not going to get hit by a truck on the way.

Case in point on Metropolitan Parkway, I see somebody riding a bike on the sidewalk all the time. Often it's guys getting to work, or kids. And even on the sidewalk, they're literally one or two feet from the big trucks going by. It’s hard to feel comfortable biking on the sort of street,, so people bike on the sidewalk, which is illegal and bad for pedestrians.

How do people view bike lanes and trails in your community?

I see a lot of bikes in my neighborhood. But since we don’t have great biking infrastructure, yet, people are not using bike to commute. They use them for getting from house to house to see friends or similar small trips.

Think about it - who is more likely to need to ride a bike or walk safely - somebody who has a car, or somebody without a car? In transitioning neighborhoods, you have people that take the bus or train to work - those are the folks that need a safe way to walk to the bus stop, and a safe place to sit at the bus stop, that gives them some dignity.

Of course a bike lane raises property values and is attractive to millennials, but folks that have been in the neighborhood for a long time benefit too. Like I said, I see people of all ages and walks of life in my neighborhood biking all the time, every day. They all need safe, protected bike lanes.

What do your friends, family, neighbors, co-workers, clients, whoever you interact with regularly, think about you riding? Has it changed over time?

They're pretty positive about it, but they're also curious. They're like, do you feel safe? People ask me how to deal with the weather or how to bike at night.

How does your identity affect how you view cycling, or how you are viewed by others when you ride a bike? Does how you move reflect on who you are?

I'm a social and busy person. I have very little time to sit around and do nothing, so it's hard for me to be in a car, because it a car you can't do anything except pay attention to the road, and you're by yourself, so it's antisocial.

You can't see anything - everything's a blur as you drive by. It's amazing when I bike, I run into people I know that I haven't seen in a long time. I might notice an artist's studio or a cafe that I may have never seen if I was always driving. And if my phone is buzzing I have the flexibility to stop and take a call.

I don't blame people for driving - it's so convenient. I drove here today!

But over the long term what it does to people to be in a car every day (and I've experienced it), is that you become immune or less sensitive to other people's experiences and perspectives. You become more concerned with your immediate surroundings at home and work, and everything in between is just an afterthought.

Whereas if you ride a bike or public transit it puts everyone at a more human level where you can interact. I believe biking is more appropriate for how humans are designed, it’s more human-scaled and people-focused.