Update: the Howell Mill complete street project made it onto the City Council approved list for Renew/TSPLOST funding! We'll celebrate at the kickoff to Atlanta Streets Alive Cross-City on Sunday, June 9th.

Howell Mill Road and Marietta Street are the primary roadways for what was once a heavy industrial meat-packing district on the Westside. Now, development, density, and desirable destinations have exploded in the area and exposed the need for a safer and more accessible way to connect this critical north-south corridor to the rest of the city. The combination of new bike lanes on Marietta Street, and Luckie/PATH Parkway have made it much safer getting to the Westside from Downtown, but there is an urgent need for safer routes throughout the district, starting with Howell Mill Road.

Howell Mill Road is a key north-south corridor that connects the Upper Westside, Georgia Tech and Downtown Atlanta. Howell Mill Road, between Collier Road and W. Marietta Street, is set to become a Complete Street through the Renew Atlanta bond, which was overwhelmingly approved by voters in 2015.

Unfortunately, the Howell Mill Road suffered the same frustrating delays as many other Complete Street projects proposed in the Renew Atlanta and T-SPLOST programs, after the City had to go through a painful reprioritization process to pare down the project list. The good news is that Howell Mill Road is still on the list and is moving forward.

The Upper Westside Community Improvement District (CID) has been a staunch advocate for this project and others to improve bike and scooter access and safety. You can see a map with their priority projects on their website.

They offered the following update for December 2019:

The Howell Mill Complete Street Project has been working through the intricacies of the raised bike lane design and right-of-way (ROW) needs but reached 90% Plans in Q4 of 2019. The Renew Atlanta team and the POND/Jacobs design teams are addressing comments received by each City department on this plan set. Renew is also coordinating with utility companies about the necessary relocations. ROW acquisition has not started yet but the approximately 18-month long process is expected to begin early 2020. 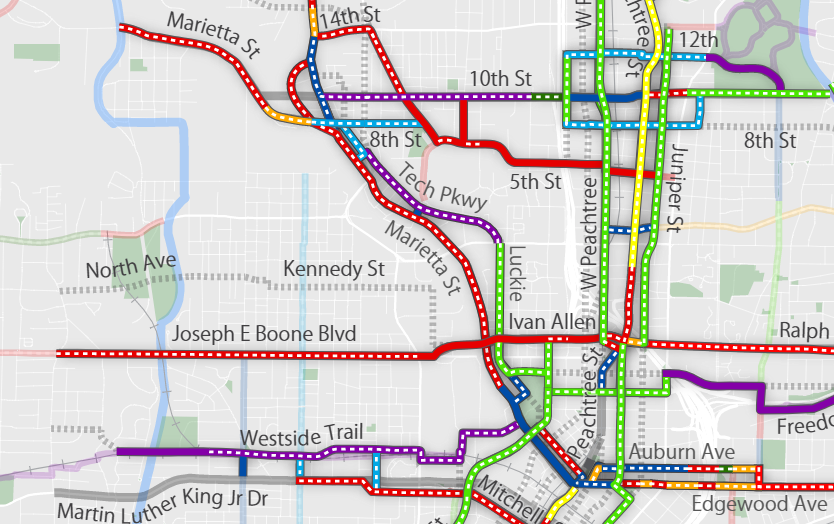 Map showing Cycle Atlanta Alignments for a complete and connected network of high-quality bicycle facilities in the core of the city.

Another important project for cyclists and other non-motorized users is the Brady Avenue bike lane, which was part of the Cycle Atlanta Plan Phase 1.0 for the area. It has a new life as part of the Mayor’s Action Plan for Safer Streets. Local partners have pledged to fund the project, and outreach has begun with property owners. The Brady Avenue bike lane is a small project, but it will help connect users from the PATH Parkway to more parts of the district as we wait for Howell Mill to go to construction.

Obviously, we would love to see both projects move as quickly as possible to make this part of the City more accessible for all users.