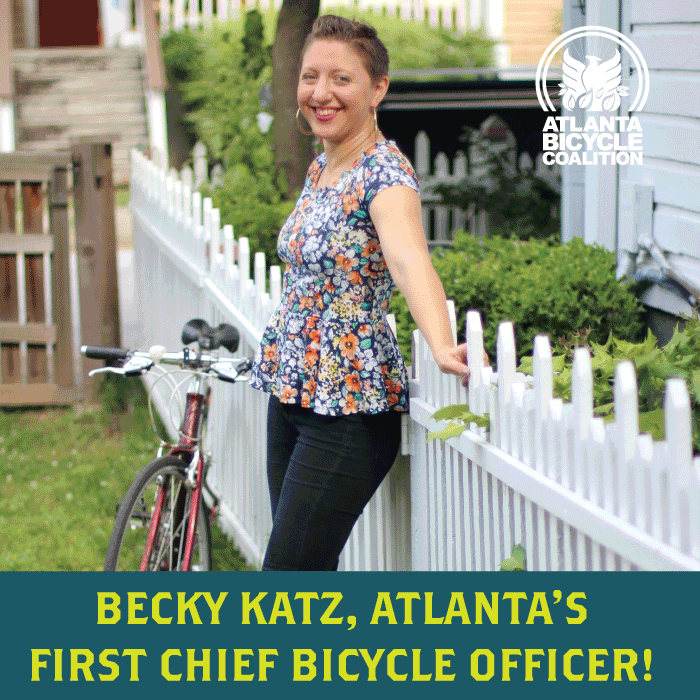 The City of Atlanta has hired its new Chief Bicycle Officer, and if you’re active in the Atlanta bicycle community, you may already know her.

Becky Katz, an Atlanta Bicycle Coalition volunteer and member, has been hired as the Chief Bicycle Officer. Katz, who has spent the last four years working for Park Pride as the visioning and grants project manager, has guided communities through a collaborative visionary process to redesign their community parks. In this role she gained strong project management experience as she tracked progress, managed budgets, problem solved, collaborated and communicated with stakeholders and worked through permitting, design and planning challenges.

Her work not only energized the community to improve their quality of life, but also brought in private and public dollars to help reach their goals. Katz managed construction document development, permits and construction, experience which built an understanding of the delicate balance and dynamic nature of private/public partnerships, community input and implementation of projects. She has also guided nine different Atlanta communities through a collaborative visionary process to redesign their community parks.

Katz starts October 14 and will be responsible for a wide range of activities related to bicycle transportation in the City of Atlanta. Duties will include public outreach, project development, grant writing, engineering/planning bicycle projects to completion, oversight of the city's bike share program, and ensuring new development is consistent with bike elements of the city’s existing plans. She will also coordinate with the Department of Public Works and Georgia Department of Transportation to include bicycle facilities in all roadway maintenance and capital projects and work through Invest Atlanta to support bike projects that advance Atlanta’s economic competitiveness.

“We are pleased to have Becky Katz join the City as the Chief Bicycle Officer,” said Mayor Kasim Reed. “With the support of the Atlanta Falcons Youth Foundation and the Atlanta Bicycle Coalition, this position will be integral to the city’s continued progress on our Cycle Atlanta goals. Ms. Katz is joining an administration that is energized and organized around the many opportunities before us to make Atlanta the most bikeable, walkable, livable city in the Southeast.”

Katz graduated from Cornell University with a Bachelors in Environmental Engineering and King Abdullah University of Science and Technology with a Masters of Environmental Engineering. Her engineering research focused on community driven engineering design, and was a joint project with University of California at Berkeley. Often in the engineering field, community input and values are not part of the equation. But Katz worked both in undergrad and graduate school with historically disenfranchised communities to help them design water systems and basic infrastructure.

In addition to her role at Park Pride, Katz helped coordinate the Atlanta Bicycle Coalition’s monthly Bike Commuter Breakfasts and has been instrumental in building tactical urbanism elements into Atlanta Streets Alive. Katz is also active in her neighborhood in Southwest Atlanta, Adair Park.

The CBO position is made possible by the Atlanta Falcons Youth Foundation (an affiliated fund of The Arthur M. Blank family Foundation), which awarded a five-year $250,000 challenge grant to the Atlanta Bicycle Coalition to create a “Chief Bicycle Officer” (CBO) at the City of Atlanta.

We couldn’t be more excited to see Katz fill this critical role for biking in Atlanta. Please join us in saying congratulations to Katz and wishing her luck in her new position.

We’ll be posting an interview soon.