Catching Up with the City of Atlanta's New Chief Bicycle Officer

The Atlanta Bicycle Coalition catches up with Cary Bearn, the new City of Atlanta Chief Bicycle Officer, to find out what she has planned for Atlanta’s bicycle network. 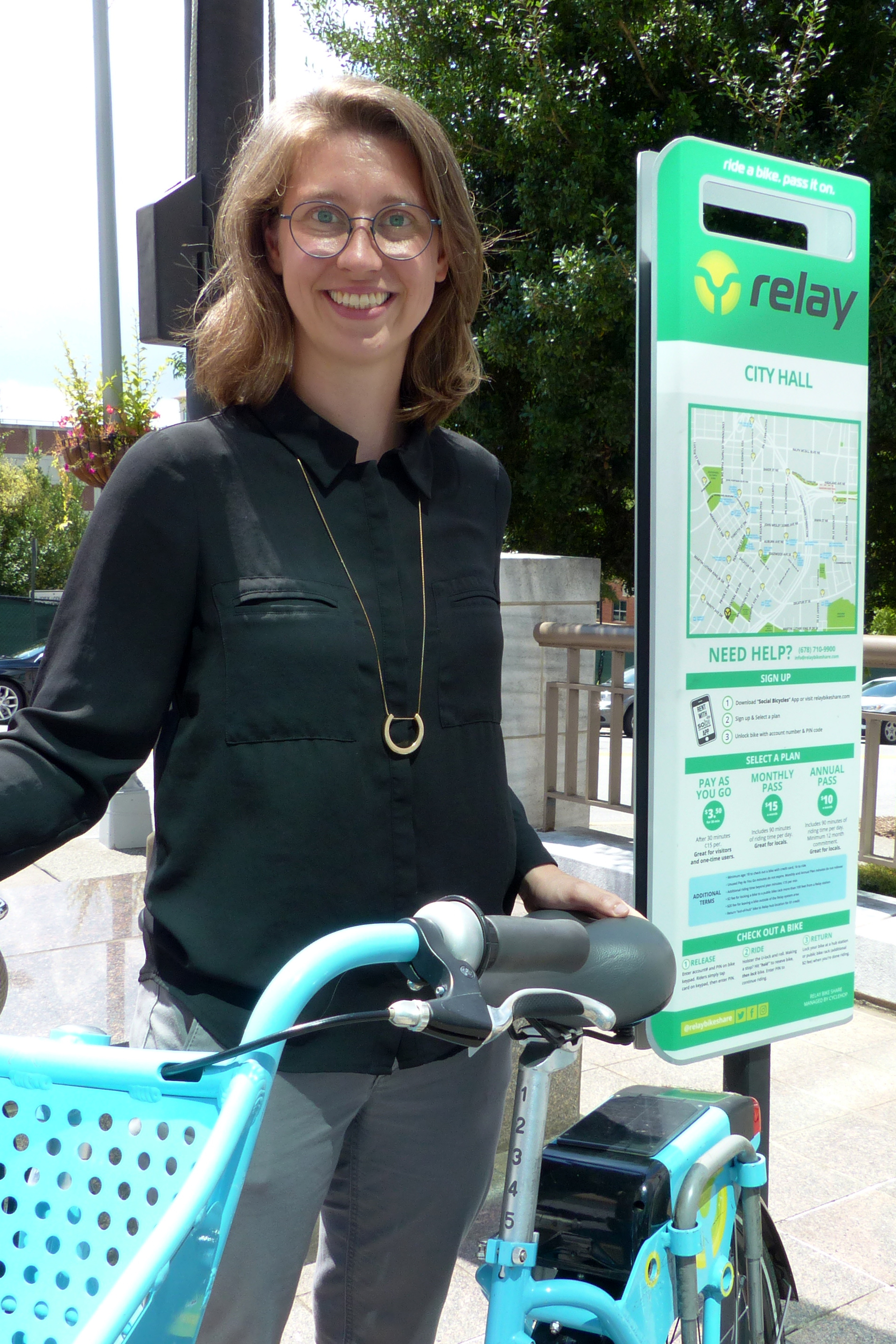 You mentioned that you’re going to see Beyoncé in concert in a couple weeks. As a proud member of the Beyhive, what did you think when you saw her biking across the Brooklyn Bridge on her way to Barclays Center?

Hilarious question. Not sure if I’d consider myself officially part of the Beyhive, but obviously she is Queen. Bringing it back to biking – I think it’s awesome that New York City has prioritized protected bicycle lanes that allow even the Queens among us the freedom to enjoy a space physically separated from cars. There is a lot we can learn from New York and other cities across the country to change the narrative around mobility. New York City has also been a leader in the Vision Zero strategy, a space that Atlanta is entering with the adoption of Atlanta’s Transportation Plan.

Safer streets and enhancing the biking environment are two big priorities coming out of the soon-to-be adopted Atlanta Transportation Plan. Do you plan to hit the ground running -- or rolling -- when the plan’s adopted by City Council? Where do you even begin?

As part of Atlanta’s Transportation Plan, the City has fully embraced safety, mobility, and affordability as priorities. With its upcoming adoption, the City has committed to the development of a Safer Streets policy and program aimed at reducing traffic fatalities to zero and eliminating serious injuries. This commitment helps establish safety for all roadway users as the number one priority.

Of course, it’s unfortunate that across the country, safety needs to be called out as a priority through policy documents. However, the development of these policies is a big step toward shifting our focus from moving cars through the city towards creating safe spaces for people to get around.

The Department of City Planning’s Office of Mobility has identified several actionable items including the implementation of safety improvements at priority intersections. A major part of the efforts to improve safety is rethinking the way data is collected and processed to better support the Safer Streets policy. We can and should always be designing our streets to be safer. The City’s Safer Streets efforts will go a step further by using data to identify smart investments for the most dangerous streets to protect the most vulnerable users.

Even though we’re the local bike advocacy organization for Atlanta, we find ourselves advancing projects and issues that aren’t exclusively about bike infrastructure because biking, walking, and transit are often inextricably tied to equity, affordability, and safety. What role do you think the humble bicycle plays in Atlanta’s transportation ecosystem?

The amount someone moves around the city outside of a personal vehicle be it on a bike, walking, in a transit vehicle - whatever, has to do with so many factors. These include access to a personal vehicle, trip length, availability of transit, personal ability, age, gender, perceived safety, cost, service reliability, weather…the list goes on. It is a multifaceted decision that people make daily.

Although transportation is this complex decision that involves many personal, economic, and environmental elements, our historical way of thinking about transportation is overly simplified, inefficient, and misguided. We cannot accommodate the growth projected for Atlanta without looking beyond the personal automobile. This means developing and implementing high quality projects which prioritize biking, walking, and transit to help people reconsider their decisions. Ultimately, this will enable us all to move around the city more safely, reliably, and comfortably. In short – biking does not exist in a vacuum. It is a great option for getting around the city and we want biking to continue to be an option as Atlanta grows. A responsible transportation network must provide multiple high quality non-driving options.

Atlanta Streets Alive initiatives are incredible! I love the way they can introduce people to the city in new ways. Streets Alive is also a great way for people to get more comfortable on a bicycle. One of my favorite things is they are an excellent demonstration of how many people are interested in biking if the conditions were different. I’ve biked in open streets events with cautious riders who have, after their open streets experience, begun using a bike for short day-to-day trips. Beyond the biking experience, Streets Alive is such a fun way to explore the city and experience both entirely new places and familiar places from a completely different perspective.

The Chief Bicycle Officer position was created through a public-private partnership between the Atlanta Bicycle Coalition, the City of Atlanta, and the Atlanta Falcons Youth Foundation, to enable Atlanta to achieve national recognition as a Bicycle Friendly Community.