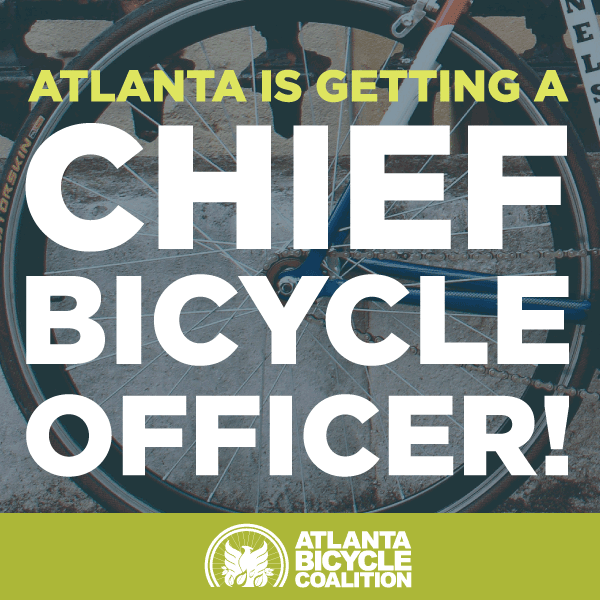 For the last three years, ABC has worked with multiple stakeholders to broker a deal for the creation of a Chief Bicycle Officer for the City of Atlanta. The Atlanta Bicycle Coalition is happy to announce that the city is officially accepting applications for the position of Chief Bicycle Officer! (Please see the job description here.)

This position would not be possible without a generous grant from the Atlanta Falcons Youth Foundation (AFYF).  Thanks to AFYF and people like you, the Chief Bicycle Officer position will be funded for five years for the City of Atlanta. Read the press release from the city.

Where the idea came from

“Boston was an award-winning cycling city when I started,” Freedman said. “We had been three times rated the worst cycling city in the country by Bicycling magazine."

Boston only had 180 feet of bike lane when the city hired Freedman as the Director of Bike Programs, in 2009. Under Freedman’s watch, Boston launched the city’s popular Hubway bike share program, installed 50 new bike lanes, including a bold new bike lane on Mass Ave., the city’s main thoroughfare, and cracked down on cars parking in bike lanes. Boston is now a Top 20 Bike-Friendly City and a nationally-recognized Bicycle Friendly Community by the League of American Bicyclists.

What the Chief Bicycle Officer means for Atlanta

The public-private partnership to fund the Chief Bicycle Officer for Atlanta will have tremendous returns, at a key time in Atlanta’s bicycle history.

"A Chief Bicycle Officer for Atlanta comes at the perfect time to leverage the progress we have made and the opportunities before the city,” said Mayor Kasim Reed in the press release. “From the city’s infrastructure bond spend to the bike sharing program and Atlanta’s engagement with the ‘Mayor’s Challenge for Safer People, Safer Streets’ sponsored by the U.S. Department of Transportation, this is an exciting time for cycling in Atlanta.”

Apply, pass along to friends who might fit the role, or share on social media to make sure we get the quality Chief Bicycle Officer Atlanta deserves!

Please see the link to the job description here.

Plus, if this is the kind of change you want to continue seeing, please become a member of the ABC, if you're not already! With over 1000 members, we may be small, but we punch above our weight, and we're growing every day!