*A experiential testimony from Melinda, the blogger who writes Life on Wessyngton Road.

Clearing the cars off the road and walking or biking the route changes how you see your city. The first time I participated in an Atlanta Streets Alive event was in May 2012.  Highland was closed from Virginia Avenue to somewhere in Inman Park -- around Corley Street, as I recall. It never had occurred to me that I could walk from Morningside to Inman Park, but Iain and I did that day. Since then, I've been at almost every Streets Alive event there's been, if not every one.  There have been events on Peachtree, and the North Highland route has been extended include a section of Boulevard. There have been two Streets Alive events in the West End.  For most of them, since that first one, I've been a volunteer, but last Sunday I wasn't working (there had been no email, saying they really needed just a couple more volunteers, if any of us could make it), so Iain and I loaded up our bikes in the van and drove to Grant Park. 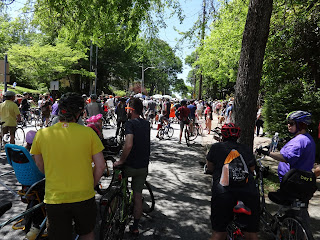 It wasn't hard to find the starting point -- Georgia Avenue was barricaded and there were lots of people waiting for start. There were speeches first, but we couldn't really hear them; we were too far back.

We did see this beautiful black cat on a leash, while we were waiting for the start. I often ask dog owners if I can take a picture of their dog; this may have been the first cat that I ever photographed in a public place that was accompanied by its owner.
There was music.  This band with dancers was near the start. 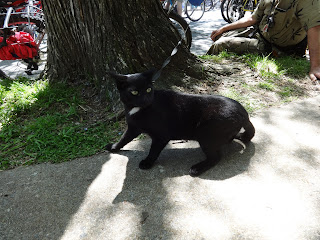 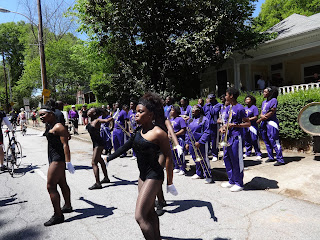 This band was in front of the West End Performing Arts Center. As in previous events, there was a lot of music along Ralph David Abernathy Boulevard in West End. 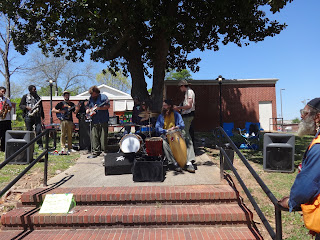 Towards the western end of the route, there was bicycle polo. There not being so many lawyers involved, it did not appear that you had to sign a waiver in order to play. 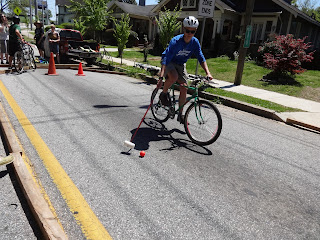 On the way back, we stopped to see the chalk art; I think this was near Gordon-White Park in the West End. We got vegetarian Caribbean food from a food truck in the West End and then got back on the road. 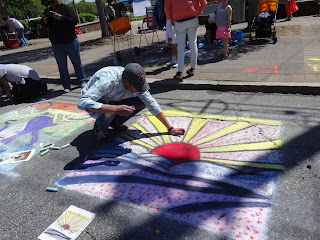 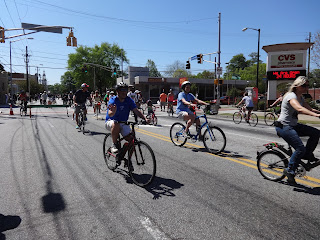 But we didn't go very far before we stopped for dessert at Krispy Kreme, and then we found the MARTA Army table, where I got my new bus schedule to post. I first joined the MARTA Army at the last Streets Alive event on Boulevard, when they were set up at a table across the street from where I was working in an Atlanta Bicycle Coalition tent. I asked Simon if I could take his picture, and he insisted that I be in it too, which wasn't really what I had in mind, but there I am. 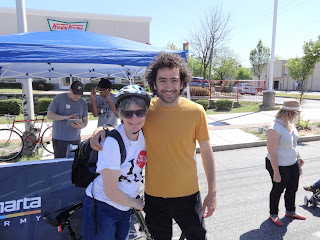 Then we continued east, and caught up with the famous phoenixes that always lead the bicycle parade. Here's Chantelle Rytter, the force of nature behind the Beltline Lantern Parade and the bicycle parades at Streets Alive events. Earlier, she had stopped at the same food truck we did, with a few other people, and someone asked her about the photo of her that is currently on the Atlanta Streets Alive website. She laughed and said, out of all the pictures there are of her, they had to use one where she had a mustache on? 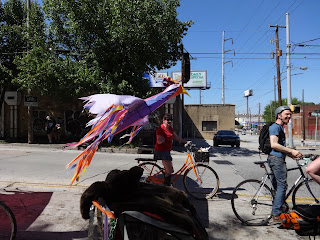 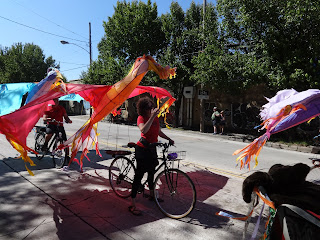 The theme for the bicycle parade this time was zoo animals (since the parade was starting so close to the zoo), and there were lots of zebra bikes like this one. It wasn't the liveliest or most crowded Streets Alive event I've ever been to -- that's always on North Highland, where bars and restaurants set up tables on the sidewalks and spill into the street, and the there are so many people you can't ride a bike through the crowd -- but in some ways it was the best one.  Grant Park I sort of know -- we used to go to the zoo when the kids were younger, I took flute lessons there for a few years, and now we go to restaurants there sometimes -- but the only time I've been to Summerhill was when I worked at the Summerhill fall festival for Living Walls a few years ago. The route took us through Summerhill and Mechanicsville, right past the soon-to-be abandoned Braves stadium before we got to West End. These are neighborhoods that weren't well-served by either the Braves or the City of Atlanta.  (Let's see if the redevelopment that is being planned for the area will finally make things better for the people who've lived here all this time, as opposed to just making it better for the developers.) What was special about this route was the demonstration that these neighborhoods in fact could be connected by what should be one of the great east-west cross streets in the City of Atlanta. Grant Park is a thriving neighborhood, and once that massive dead zone of parking lots is replaced by something that is actually occupied more than 81 days a year, Summerhill and Mechanicsville should be better places to live. Connecting all these neighborhoods should help all of them.

Although there seemed to be fewer restaurants and other local establishments participating along some parts of the route, there was a nice neighborhood festival feel pretty much all along the way. The neighborhood associations were all there, with tables and tents and friendly people there to answer questions. I know that the Bicycle Coalition made a conscious decision not to do the same loop in West End this time, but to make the case for connectivity.  It was, I think, a great decision. They have a petition on their website now, asking for support for biking infrastructure investment along Georgia Avenue and Ralph David Abernathy Boulevard. The time is right to stitch the fabric of our city back together, and I don't know a better way to do it than to make a pretty modest investment in infrastructure that can help make this corridor one of the great streets in our city.