Last week’s resignation of Ryan Gravel and Nathaniel Smith from the BeltLine fundraising board focused a spotlight on equity concerns, affordable housing, gentrification and displacement related to the BeltLine.

We’re not housing experts, of course. Our focus at the Atlanta Bicycle Coalition is on making biking safe, equitable, and appealing as a key aspect of making Atlanta a better, more accessible, more livable place for everyone.

If people can't afford to live within biking distance of where they want or need to go, we won’t  succeed, no matter how many great bike lanes and trails we successfully advocate to build. 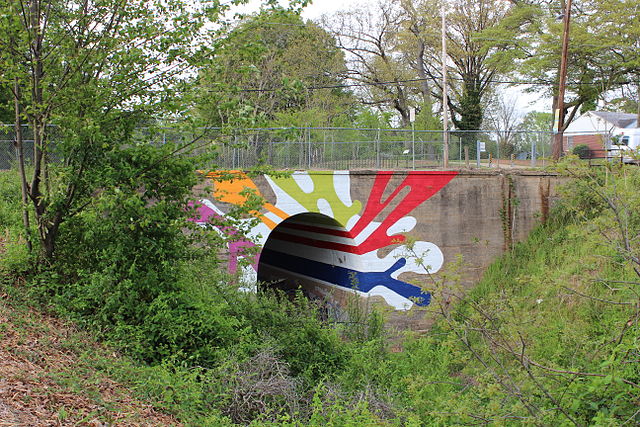 I met Ryan Gravel back in 2004, at one of the hundreds of small civic meetings where he presented his thesis concept - reclaiming Atlanta's rail infrastructure for transit, trails, development, parks, and housing. I was on the board of Citizens for Progressive Transit, and helped promote the concept at City Hall on a Sunday afternoon. It wasn’t the best-attended public meeting I’ve ever participated in, but I’ll never forget the excitement in that room as we realized the full scope of Ryan’s vision. The BeltLine may not have been an entirely new idea, but its expansiveness was, and the the shimmering outline took hold of our minds like it did so many others. I still have my “Friends of the BeltLine” t-shirt.

Fast forward to 2016, and trails and bike lanes are under construction throughout Atlanta. It’s exciting, to say the least, and everyone from the Georgia Department of Transportation to corner stores talk up their proximity to this new infrastructure.

But just as neighborhoods get the civic investment and concurrent private development that can make intown living so convenient and vibrant, these investments are triggering skyrocketing housing costs, pricing many people out of places we love. 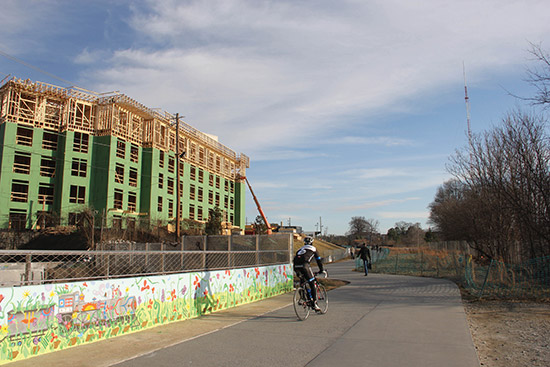 Image from Rails to Trails

Ironically, in the past, trail projects in metro Atlanta often faced opposition from homeowners worried that trails would bring down their property values. So advocates dutifully explained that the reverse is true - study after study shows trails raise property values.

Now that trails and bike lanes are coming to neighborhoods where rapidly rising property values aren't a straightforward benefit for everyone, increasing rents and taxes are making it harder for people to stay in communities they have made home despite years of civic disinvestment.

For homeowners whose houses went underwater during the housing crisis or whose personal wealth is tied up in their homes, an increase in home value can be a good thing. But if your tax bill skyrockets and your income hasn't changed, you may find yourself unable to afford the price tag of civic improvements. This is especially true for communities of color, due to our history of racial injustice, redlining, and lack of access to opportunity (Wall Street Journal, Washington Post),

For renters, the problem tends to be even more pressing. The buzz around projects like the BeltLine can trigger big year-to-year rent increases or prompt homeowners who couldn’t afford to sell previously to put their houses on the market.

Truly affordable housing options that are stable over time would not only help those residents; they would help keep the city economically diverse and inclusive for lower income families and individuals (for renters, that is often defined as those earning less than 30-60% of the area median income, or $21,000-$43,000 for a family of 4 in 2010). This will create more vibrant, healthy, and equitable places for everyone.

Atlanta has long enjoyed a national reputation for affordability. It’s part of why creatives, artists, musicians, entrepreneurs, families, and business owners want to live here. It’s in all our best interests to keep them, and to keep drawing talent and creativity to our city.

As we educate ourselves about housing, we’re thinking a lot about something we're calling ABOD - Affordable Bicycle Oriented Development. This concept builds on TOD, or Transit Oriented Development, an approach that is finally seeing concrete gains in metro Atlanta. But instead of developments centered primarily around MARTA stations, ABOD would build affordable and inclusive housing on bike lanes and trails.

For developments in places with great bike access or bike projects in the works, parking requirements could be reduced or eliminated. That would bring construction costs down, so developers could price units lower and qualify for affordable housing incentives. (For more on how parking influences the design and use of our neighborhoods and cities, check out this video from Kronberg Wall). But it will require forward-thinking change at the city level.

We can learn from other cities experiencing gentrification that have had longer to come up with solutions. Many of them have eliminated or are considering tackling minimum parking requirements as part of that process.

One of my favorite city transportation experts, Todd Littman, notes:

“Most zoning codes and development practices require generous parking supply, forcing people who purchase or rent housing to pay for parking regardless of their demands. Generous parking requirements reduce housing affordability and impose various economic and environmental costs. Based on typical affordable housing development costs, one parking space per unit increases costs approximately 12.5%, and two parking spaces can increase costs by up to 25%. Since parking costs increase as a percentage of rent for lower priced housing, and low income households tend to own fewer vehicles, minimum parking requirements are regressive and unfair. (Parking Requirement Impacts on Housing Affordability - August 24, 2016)

Also, we’re learning how policy changes such as allowing "missing middle" housing (duplexes and subdivided houses), and even tiny houses, could bring more variety to our housing stock. This would also provide homeowners on fixed incomes access to another income source by allowing them to sublet units in their homes or convert garages to carriage houses in backyards.

Income inequality and economic mobility are huge challenges facing Atlanta (and many other cities), and we should employ all the solutions we can think of to address it. Giving people better access to public transportation by connecting bike lanes and trails to transit is one approach. Investing in our affordable housing stock that connects with both bikeways and transit is another.

As Gravel said in the Saporta Report, "I believe in the BeltLine... I believe it can be for everybody. I don’t believe it’s too late. I want to be constructive, and I want to build the BeltLine that we’ve been talking about."

The Atlanta Bicycle Coalition has been a long-time supporter of the vision for what the BeltLine can be.  We’ve benefitted from the trail’s added safety, visibility, and mobility for people who want to traverse the city on foot and by bike. It's time to make that vision real for everyone, by getting serious about affordable housing in Atlanta.

As we look to 2017 and citywide elections, we plan to be a bigger and more active voice on these issues.