On Wednesday, July 12, we received a puzzling email from a member - “are the bike lanes being removed from Westview Drive???” 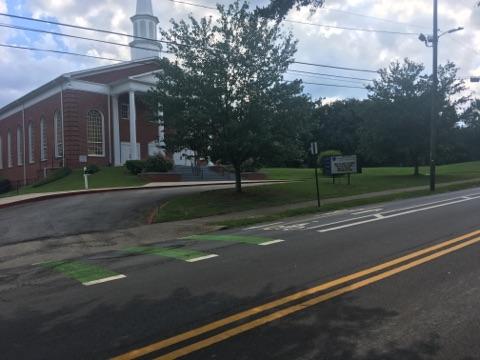 As we discovered, a short section of protected bike lane in front of a church on Westview Drive was indeed being milled up and the posts protecting it removed. We started making calls, but no one seemed to know who had authorized the removal or how the decision had been reached.

Eventually, we learned from the Commissioner of Public Works and the Councilmember for District 4 that the removal was spurred by the concerns of a local church, “so that both bikers and parishioners can use the facilities.”

Yet a church spokesperson told a reporter the church had only wanted the lane modified, not removed.

Join us in taking action for safe streets:

Let the city know that safety of public infrastructure is of top concern!

What happened on Westview is not about any one person or institution. It’s about process and safety. It has also brought to the surface long-standing concerns about gentrification and displacement. ABC opposes displacement and supports affordable housing investments. (Those are big topics so we wrote a separate post.)

The safety implications of the removal are our top concern. Data from the City of Atlanta shows that in the past year that the bike lane existed, crashes (car, bike, pedestrian) decreased 38%! Even more compelling, crashes that caused serious injuries fell 68%! Local residents were safer because of the project.

This brings us to a complex issue. What takes priority--- public opinion of valued stakeholders, or validated safety metrics? Does not wanting something take priority over preventing injury and saving lives? Yes, neighborhood desires should shape the neighborhood, but if I don’t want a bus stop or a speed bump in front of my house, do I have the right to prevent someone else from safely getting around? These aren’t radical questions---just reality. You are less safe on Westview Drive today than you were a week ago. That is not social justice.

First, this project needed more community outreach. When the lane was originally installed, church leaders were taken by surprise. While the city followed its standard public engagement process, as far as we can tell, no one specifically notified the church. The Church as an institution has a special role and history in communities of color, and we believe a step should be added to the standard city outreach process to ensure churches and community centers of all kinds are directly informed about bike projects. Relying on public meetings and flyers is insufficient. We hold the city accountable to that, but we’re also investing in our own capacity for direct outreach, by fundraising to hire staff to dedicate time to community engagement and organizing.

With insufficient outreach at the onset of the project, it should be no surprise that some people felt ignored in the decision-making process.That said, community feedback was not altogether forsaken.  After listening to some concerns from the church and MARTA, the City did modify the bike lane, removing some of the flexposts to facilitate turns. The District 4 Councilmember also passed legislation to permit parking in the bike lane on Sundays and during special events.

However, what happened Wednesday was not a compromise. Rather, taxpayer dollars dismantled a public benefit without following the city’s own process.

City code states “Designated bicycle routes, bicycle lanes, and multi-use trails shall not be removed or substantially altered except as specifically authorized by the city councilthrough an appropriate resolution.” (Sec. 150-65) In addition, Section 2 of Ord. No. 1997-61 reads as follows: "The council further ordains that any previously designated bicycle lanes that have been removed, other than by action of the Atlanta City Council, shall be reinstalled."

In addition to not feeling included in the process, some Westview Drive community members have raised an additional layer - concerns about gentrification and displacement. These are pressing, important, and nuanced topics, so we wrote a separate post.

The Atlanta Bicycle Coalition is committed to an equitable city, and we oppose displacement. When schools, parks, transportation and other public goods get better, property values go up. That’s our economic system. Without the right housing policies in place, a growing number of Atlantans are being displaced by good things. That’s not right. All Atlantans deserve to benefit from a higher quality of life.

The Atlanta Bicycle Coalition is concerned, like many Atlantans right now, about the growing affordable housing crisis in our city. A lot of people bike because it's affordable and self-sufficient. This year, we include support for affordable housing in our bicycle transportation advocacy, because we recognize that housing and transportation are inseparable. There’s no use in having a bike lane or better transit if you can’t afford to live near it.

We also started participating in the TransFormation Alliance, a partnership of organizations “dedicated to creating thriving, mixed-income communities anchored by transit and linked to all the opportunities and amenities that make Atlanta great.” With its focus on Lee Street, working with the TransFormation Alliance is a highly relevant way for us to stay focused on our mission, while supporting the work of housing advocates.

The Westview protected bike lane was installed through the PeopleForBikes Green Lane Project, a national initiative helping U.S. cities build the kind of bike projects that do the most to add safety and comfort. The City selected Westview Drive for the project because it is an extra wide street, leading people to drive way too fast for a neighborhood street. The reconfiguration included a two-way bike lane separated from traffic by flexposts, with green markings at driveways and intersections. (Just this month, the City and ABC installed a bike counter on the lane to measure how many people were using it.)

The protected bike lane on Westview Drive is a little shorter today. Safety and process were overrun by convenience and behind the scenes maneuvers. Anxieties around gentrification and displacement continue to confound efforts to make improve transportation options, and our housing crisis continues. If all or any of these issues concern you, please get involved. The more you know, the more you can share. Attend your neighborhood meetings and do you part to make everyone better informed, and more empowered to be part of the city we are building, together.