Last week was a sad one. Following a tragic crash on Monroe Drive, we called for safety improvements at the intersection of Monroe & 10th. Many of you took part, and we appreciate your involvement. This is just the beginning of a push for safer speeds, crossings, and people-oriented streets. Last week Mayor Kasim Reed and Atlanta City Council members pledged to accelerate the Monroe Drive safety overhaul and complete street project. Read more for details. 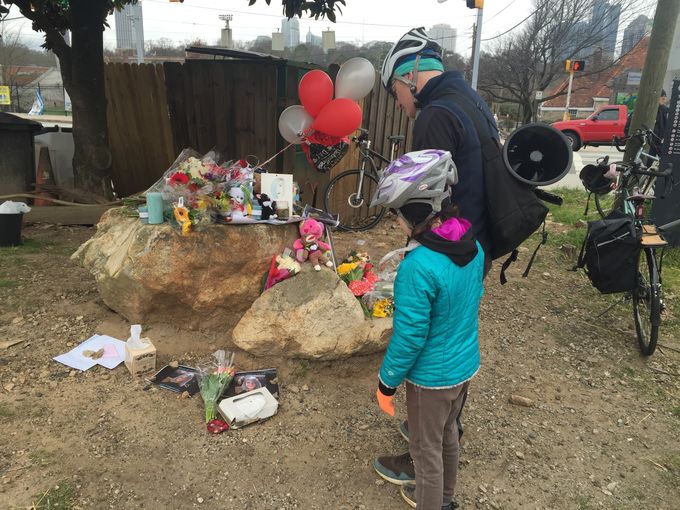 The tragedy renewed attention to a busy intersection known to be especially dangerous for people on foot and bike. At this critical moment, with the approval from Alexia’s mother and with your support, we moved forward to call for the changes necessary to prevent fatal crashes and protect Atlanta’s families at this intersection (11 Alive coverage). 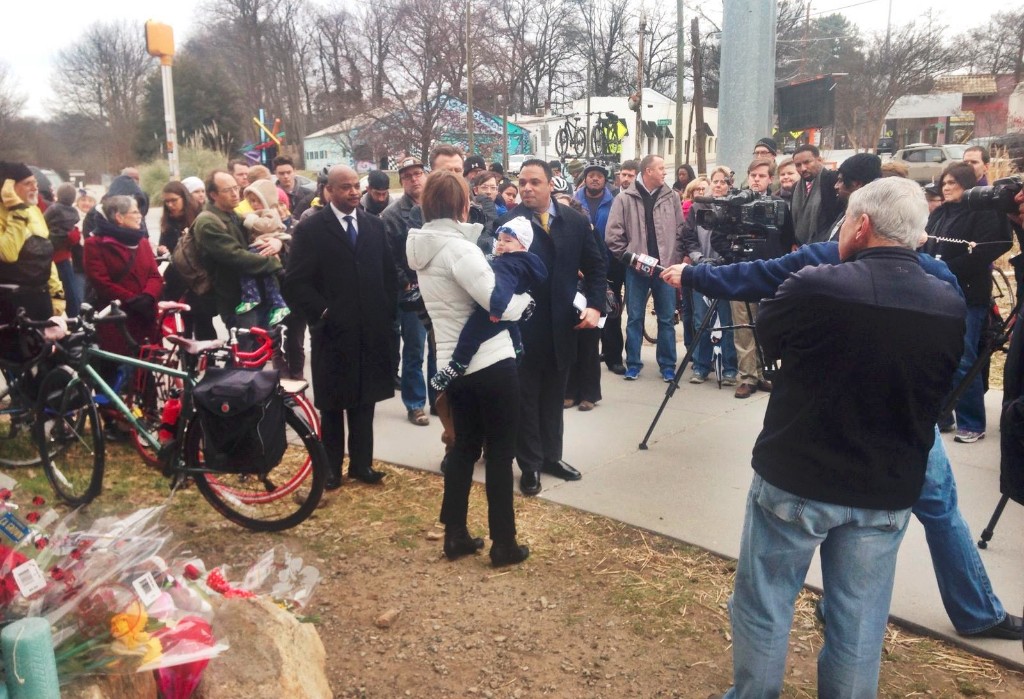 Grady High School, Piedmont Park, a protected bike lane and the Atlanta BeltLine all meet at 10th and Monroe. It's one of the city's busiest intersections for people on foot and bike, and everyone who uses it deserves to be safe.

No one should die trying to get home.

After the memorial, ABC went to City Hall to address the council meeting. Thanks to nearly a dozen supporters on the public comment list who ceded their time to ABC, we were able to propose our course of action to the city council.

ABC called for the city to reconfigure the signal in a way that prioritizes the safety of people who cross the intersection ahead of roadway traffic. ABC also called on the city to accelerate the Complete Streets project on Monroe Dr. currently underway through the Renew Atlanta infrastructure bond to address this dangerous crossing immediately. Finally, ABC called on the city to put safety before speed by cracking down on red light violations and speeding at dangerous intersections.

Council members Alex Wan and Kwanza Hall informed proceedings they would pool their Renew Atlanta bond resources to address safety issues and build a Complete Street throughout the length of the Monroe/Boulevard corridor. A senior representative of the Mayor’s Office then affirmed Mayor Reed’s support for accelerating the project in his statement on the death of Alexia Hyneman.

We are heartened to see the outgrowth of support for safe streets and the commitment to overhaul Monroe Drive, but we know that it came at a great cost. Nothing will bring Alexia back, but we hope the steps we as a community take in the days after her death will prevent future tragic crashes in this area.

After Monday’s events came to a close, Alexia’s father, Thomas Hyneman, told Fox Five news, "I'm sure she's glad they're coming together, and the same thing won’t happen to a poor kid on the way home." (Fox 5 News coverage.)

The Atlanta Bicycle Coalition and PEDS met with City of Atlanta staff and elected officials Friday, February 19th, to review the next steps for the design and implementation phase of the signal prioritization and Complete Streets on Monroe Drive. We also attended a discussion with Grady's Principal on Monday, February 22nd.

This is not the only worrisome intersection in the city. Quality infrastructure like the BeltLine merits equally well-designed intersections and adjacent streets that work for people by putting safety before speed. Once this intersection is addressed, with your input and support, we plan to raise awareness of other confusing or dangerous intersections.

Please join us for a panel discussion with the board members of the Atlanta BeltLine TADAC to share your thoughts on how to improve connectivity and access to the BeltLine.

Discussion Topic
We'll talk about connectivity, the best parts of cycling on the Atlanta BeltLine and how it might be improved.