"Bring Atlanta Streets Alive to my community," people tell us. We hear you. That's one reason we activate routes around the city, collaborating with a cluster of neighborhoods for a few years and, gradually, sharing the open streets experience with more of Atlanta's 242 neighborhoods. That is intentional. Here's where we're opening Atlanta's streets to people in 2019.

Opening streets has a way of opening hearts and minds, and we want to sprinkle that magic across Atlanta.

Through Atlanta Streets Alive, we create an environment we hope will evolve into tangible, communal changes — including infrastructure changes. Open streets also create a sense of peace — no worrying about cars speeding past, no fumes to breathe, just spending time with friends and neighbors, getting some exercise and enjoying a little island of quiet in the city.

Since the first Atlanta Streets Alive on Edgewood Avenue in 2010, we've introduced a new route every year or two. This year, it was the Westside route on Marietta Street and Howell Mill Road, which we'll return to in June of 2018. We'll also return to Peachtree Street from South Downtown to Midtown in September. 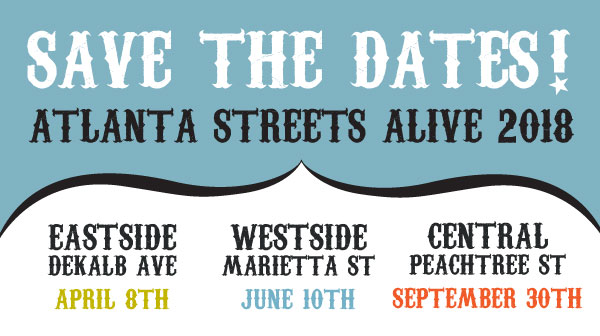 First, we're taking it to the Eastside.

In April, we'll reclaim a stretch of Decatur Street and DeKalb Avenue from Downtown to Lake Claire and Kirkwood as public space for people.

"For too long, this corridor — especially the reversible lane, sometimes chillingly referred to as a "suicide lane" — has been a high-stress, high-fear environment due to the high crash rate for those driving and the lack of safe spaces for people outside of cars to walk, bike or access MARTA."

When the city's Complete Street project on DeKalb Ave funded through the Renew Atlanta bond program stalled this year, we knew that Atlanta Streets Alive could be a valuable tool in garnering support for this safety improvement.

Turning this street into a "Complete Street" that meets the needs of people walking, biking, taking transit and driving will improve access and safety for everyone who lives or travels on this dangerous stretch of roadway. While “Complete Streets” isn’t a tip-of-the-tongue term for most Atlantans, Atlanta Streets Alive sparks its appeal by providing an immersive street experience in which community, equity and transportation intersect.

We are opening Decatur Street and DeKalb Avenue to support the community-minded, equitable and sustainable vision many residents hold for the future of their street.

Now that you know the rationale behind the new route, let's talk about the transition of the beloved Southside route.

While we love all of our routes, Southside holds a special place in our hearts. It hasn't always seen the best weather, but the spirit of the communities involved shone through, rain or shine. Music in the Park(MITP), a major partner with Atlanta Streets Alive, played a big role in that, so we're absolutely thrilled to share that the organizers, including our friend Kebbi Williams, plan to "take it to the streets" in 2018. That's right, Music in the Park is adding an open street component!

Overwhelming community support and the willingness to keep innovating is precisely what sustains the impact of open streets. To foster the momentum created by MITP's ongoing commitment, the Atlanta Bicycle Coalition is contributing time and expertise in the navigation of the City permitting process to help with the logistics of the open street activation.

*RSVP to Music in the Park and invite your friends!*

While moving on from a route is bittersweet, it's a necessary part of bringing open streets to neighborhoods throughout the city. Plus, we're pleased to see Ralph David Abernathy Blvd. receive safety upgrades that will make it safer and easier to bike and walk on this street. Don't worry; there's a chance we'll revisit much-loved routes like Southside!

Another essential element of Atlanta Streets Alive is you. As we approach another year helping Atlantans revision our streets as public space and developing this experience into an expectation, please consider contributing in one of these ways:

We are delighted to try new things this year and, while we’ll miss the old, we’re confident that you’ll want to ride along with us for what's ahead. Thank you for all your support. We'll see you on the streets in April, June and September 2018!